A wise person once said: "A fool learns from his experience. An intelligent person learns from the experience of others." To which one could add: "And an idiot does not even learn from his own experience."

So what can we learn from a book which shows that we do not learn from experience?

All this is building up to a recommendation for such a book. I don’t recommend books as a rule, not even my own. But this time I feel the need to make an exception.

This is William Polk’s book, Violent Politics, which has recently appeared in the United States. 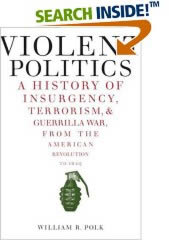 Polk was in Palestine in 1946, at the height of the struggle against the British occupation, and since then he has studied the history of liberation wars. In less than 300 pages he compares insurgencies, from the American Revolution to the wars in Afghanistan. His years on the planning staff of the State Department involved him with the Israeli-Palestinian conflict. His conclusions are highly illuminating.

I have a special interest in this subject. When I joined the Irgun at age 15, I was told to read books about previous liberation wars, especially the Polish and Irish ones. I diligently read every book I could lay my hands on, and have since followed the insurgencies and guerrilla wars throughout the world, such as those in Malaya, Kenya, South Yemen, South Africa, Afghanistan, Kurdistan, Vietnam, and more. In one of them, the Algerian war of liberation, I had some personal involvement.

When I belonged to the Irgun, I worked at the office of an Oxford-educated lawyer. One of our clients was a high British official of the Mandate government. He was an intelligent, pleasant, and humorous person. I remember once, when he passed by, a thought crossing my mind: How can such intelligent people conduct such a foolish policy?

Since then, the more I have become engrossed in other insurgencies, the stronger this wonderment has become. Is it possible that the very situation of occupation and resistance condemns the occupiers to stupid behavior, turning even the most intelligent into idiots?

Some years ago the BBC screened a long series about the process of liberation in the former British colonies, from India to the Caribbean islands. It devoted one episode to each colony. Former colonial administrators, officers of the occupation armies, liberation fighters, and other eyewitnesses were interviewed at length. Very interesting and very depressing.

Depressing, because the episodes repeated each other almost exactly. The rulers of every colony repeated the mistakes made by their predecessors in the previous episode. They harbored the same illusions and suffered the same defeats. Nobody learned any lesson from his predecessor, even when the predecessor was himself – as in the case of the British police officers who were transferred from Palestine to Kenya.

In his compact book, Polk describes the main insurgencies of the last 200 years, compares them with each other, and draws the obvious conclusions.

Every insurgency is, of course, unique and different from all others, because the backgrounds are different, as are the cultures of the occupied peoples and the occupiers. The British differ from the Dutch, and both from the French. George Washington was different from Tito, and Ho Chi Minh from Yasser Arafat. Yet in spite of this, there is an amazing similarity between all the liberation struggles.

For me, the main lesson is this: from the time the general public embraces the rebels, the victory of the rebellion is assured.

That is an iron rule: an insurgency supported by the public is bound to win, irrespective of the tactics adopted by the occupation regime. The occupier can kill indiscriminately or adopt more humane methods, torture captured freedom fighters to death or treat them as prisoners of war – nothing makes a difference in the long run. The last of the occupiers can board a ship in a solemn ceremony, like the British high commissioner in Haifa, or fight for a place in the last helicopter, like the last American soldiers on the roof of the American embassy in Saigon – defeat was certain from the moment the insurgency had reached a certain point.

The real war against the occupation takes place in the minds of the occupied population. Therefore, the main task of the freedom fighter is not to fight against the occupation, as it may seem, but to win the hearts of his people. And on the other side, the main task of the occupier is not to kill the freedom fighters, but to prevent the population from embracing them. The battle is for the hearts and minds of the people, their thoughts and emotions.

That is one of the reasons why generals almost always fail in their struggle against liberation fighters. A military officer is the least suitable person for this task. All his upbringing, his whole way of thinking, all that he has learned is opposed to this central task. Napoleon, the military genius, failed in his effort to vanquish the freedom fighters in Spain (where the word guerrilla, little war, was originally coined), no less than the most stupid American general in Vietnam.

An army officer is a technician, trained to fulfill a particular job. That job is irrelevant to the struggle against a liberation movement, in spite of its superficial appropriateness. The fact that a house-painter deals with colors does not make him into a portrait painter. An outstanding hydraulic engineer does not become a skilled plumber. A general does not understand the essence of a national insurgency, and therefore does not come to grips with its rules.

For example, a general measures his success by the number of enemies killed. But the fighting underground organization becomes stronger the more dead fighters it can present to the public, which identifies with the martyrs. A general learns to prepare for battle and win it, but his opponents, the guerrilla fighters, avoid battle altogether.

The iconic Che Guevara well defined the stages which a classic war of liberation goes through: "At first, there is a partially armed band that takes refuge in some remote, hard-to-reach spot [or in an urban population, I would add]. It strikes a lucky blow against the authorities and is joined by a few more discontented farmers, young idealists, etc. It … contacts residents and conducts light hit-and-run attacks. As new recruits swell the ranks it takes on an enemy column and destroys its leading elements. … Next the band sets up semi-permanent encampments … and adopts the characteristics of a government in miniature…" and so on.

In order to succeed all along the way, the insurgents need an idea that fires the enthusiasm of the population. The public unifies around them and provides aid, shelter, and intelligence. From this stage on, everything that the occupation authorities do helps the insurgents. When the freedom fighters are killed, many others come forward and swell their ranks (as I did in my youth). When the occupiers impose collective punishment on the population, they just reinforce their hatred and their mutual assistance. When they succeed in capturing or killing the leaders of the liberation struggle, other leaders take their place – as the Hydra in Greek legend grew new heads for every one that Hercules chopped off.

Frequently the occupation authorities succeed in causing a split among the freedom fighters and consider this a major victory. But all the factions go on fighting the occupier separately, competing with each other, as Fatah and Hamas are doing now.

It is a pity that Polk did not devote a special chapter to the Israeli-Palestinian conflict, but that is not really necessary. We can write it ourselves according to our understanding.

All along the 40 years of occupation, our political and military leaders have failed in the struggle against the Palestinian guerrilla war. They are neither more stupid nor more cruel than their predecessors – the Dutch in Indonesia, the British in Palestine, the French in Algeria, the Americans in Vietnam, the Soviets in Afghanistan. Our generals may top them all only in their arrogance – their belief that they are the smartest and that the "Jewish head" will invent new patents that all those Goyim could never think of.

From the time Yasser Arafat succeeded in winning the hearts of the Palestinian population and uniting them around the burning desire to rid themselves of the occupation, the struggle was already decided. If we had been wise, we would have come to a political settlement with him at the time. But our politicians and generals are not wiser than all the others. And so we shall go on killing, bombarding, destroying, and exiling, in the foolish belief that if only we hit once again, the longed-for victory will appear at the end of the tunnel – only to perceive that the dark tunnel has led us into an even darker tunnel.

Gen. Charles de Gaulle succeeded in making peace with the Algerian rebels before reaching that stage. One and a quarter million settlers heard one morning that the French army was going to pack up on a certain date and go home. The settlers, many of them of the fourth generation, ran for their lives without getting any compensation (unlike the Israeli settlers who left the Gaza Strip in 2005). But we have no de Gaulle. We are condemned to go on ad infinitum.

If not for the terrible tragedies we witness every day, we could smile at the pathetic helplessness of our politicians and generals, who are rushing around without knowing where their salvation should come from. What to do? To starve all of them? That has led to the collapse of the wall on the Gaza-Egypt border. Kill their leaders? We have already killed Sheik Ahmed Yassin and countless others. To execute the "Grand Operation" and reoccupy the entire Gaza strip? We have already conquered the Strip twice. This time we shall encounter much more capable guerrillas, who are even more rooted in the population. Every tank, every soldier will become a target. The hunter may well become the prey.

So what can we do that we have not already done?

First of all, to get every soldier and politician to read William Polk’s book, together with one of the good books about the Algerian struggle.

Second, to do what all occupation regimes have done in the end in all the countries where the population has risen up: to reach a political settlement that both sides can live with and profit from. And get out.

Uri Avnery is a longtime Israeli peace activist. Since 1948 he has advocated the establishment of a Palestinian state alongside Israel. In 1974, Uri Avnery was the first Israeli to establish contact with the PLO leadership. In 1982 he was the first Israeli ever to meet Yasser Arafat, after crossing the lines in besieged Beirut. He served three terms in the Israeli Knesset and is the founder of Gush Shalom (Peace Bloc). Visit his Web site. View all posts by Uri Avnery