A new book by John L. Esposito and Dalia Mogahed ought to have a profound and transforming influence on Americans’ view of their government’s confrontation with Islam. The book, Who Speaks for Islam? What a Billion Muslims Really Think, presents the results of six years of Gallup polling in the Muslim world between 2001 and 2007. "With the random sampling method that Gallup used," the authors explain, "results are statistically valid with a plus or minus 3-point margin of error. In totality, we surveyed a sample representing more than 90% of the world’s 1.3 billion Muslims, making this the largest, most comprehensive study of contemporary Muslims ever done" (xi). Based on this data, Esposito and Mogahed have determined that Washington’s conflict with Islam is "more about policy than principle" (xi). The pivotal findings of this massive study for U.S. national security pertain to the motivation of the Muslims who oppose the United States and the authors’ claim that "[o]ne of the most important insights provided by Gallup’s data is that the issues that drive radicals are also issues for moderates" (93). 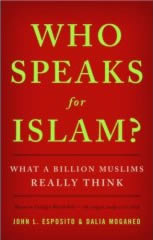 Over and over again, Esposito and Mogahed show the nearly complete absence among Muslims of a desire to destroy America’s equality of opportunity, liberties, or democracy. Indeed, the Gallup data show that these are the aspects of U.S. society that Muslims most admire. "[T]he sentiments of vast majorities of those [Muslims] surveyed," the authors write, "[show] they admire the West’s political freedoms and they value and desire greater self-determination" (31). But, of equal importance, Muslims do not believe that greater democracy and self-determination in the Muslim world require a Western-like separation of church and state. "Poll data show," Esposito and Mogahed explain, "that large majorities of respondents in the countries surveyed cite the equal importance of Islam and democracy as essential to the quality of their lives and the future progress of the Muslim world" (35). And, again, these findings are common to those the authors refer to as moderates and radicals, as well as to male and female respondents (48).

The Gallup data also show that Muslims make a keen distinction between modernity and Westernization. The surveys found that Muslims have a profound respect and admiration for the West’s technology and for its work ethic; both are regarded as tools of modernity and avenues of social and economic progress for Muslims (p. 97). Having presented this finding, however, the authors warn it must not be taken as eagerness for Westernization. "[W]hile acknowledging and admiring many aspects of Western democracy," the authors write," those [Muslims] surveyed do not favor wholesale adoption of Western models of democracy … few respondents associate ‘adopting Western values’ with Muslim political and economic progress." Perhaps the most counterintuitive result of the Gallup data for Western readers will be findings that the ostensibly degraded cultural status of women in the West is one of the things most despised by Muslims of both genders (110) ; that "the data simply do not support the persistent popular perception in the West that Muslim women can’t wait to be liberated from their culture and adopt the ways of the West" (110); and that there are no "systemic differences in many [Muslim] countries between males and females in their support for Sharia as the only source of legislation" (48).

The work of Esposito and Mogahed establishes a solid empirical base for refuting the contentions of U.S. political leaders in both parties that "Muslims hate us for who we are not for what we do." But will it do the trick? Previously, Robert Pape’s empirical study Dying to Win: The Logic of Suicide Terrorism demonstrated that U.S. intervention in the Muslim world is a key generator of suicide attacks on U.S. interests, and Marc Sageman’s quantitative study Understanding Terror Networks politely shredded our leaders’ claims that poverty, illiteracy, and unemployment cause terrorism – but the they-hate-our-freedoms chorus still chants on. Indeed, after these books were written, Norman Podhoretz and George Weigel published neoconservative tomes that not only ignored the work of Pape and Sageman, but also scourged their countrymen for being too stupid to see that all U.S. interventions abroad are saintly and only medieval Islamofascists could oppose them. On no other foreign policy issue since the Cold War’s end has the truth been so easy to establish on the basis of hard facts but so hard for Americans to see – primarily because their leaders eagerly distort or ignore the truth.

The reality accurately presented by Esposito, Mogahed, Pape, and Sageman – as well as by Dr. Ron Paul – has never eluded Osama bin Laden, however. Five years before Gallup even started collecting its data, bin Laden knew that U.S. foreign policy effectively united the Muslim world’s moderates and radicals in anti-U.S. hatred, and that when he defied Washington and attacked U.S. interests because of those policies he both drew and grew support for his jihad against America. The conclusions of my own books about bin Laden’s thinking, words, and actions – which are largely corroborated by the findings of Who Speaks for Islam? – make it clear beyond a doubt that al-Qaeda’s chief knows precisely what will sell wildly in the Muslim world and unite his brethren, as well as what will be rejected outright by U.S. leaders, with disastrous consequences for Americans.

Unfortunately, then, it seems unlikely that the fine book Who Speaks for Islam? will attract the attention, let alone change the mind, of any senior U.S. political leader. Under either party, Washington will maintain its now 40-year-old foreign policy status quo; it will keep intervening in the Muslim world; and it will continue telling Americans they are hated for who they are, not for what their government does. Ultimately, our bipartisan political elite will turn the United States into one enormous Israel, lethally deaf to the realities of our struggle with Islamists; arrogantly confidant of its pure intent and sure knowledge of God’s will; and utterly dependent on inadequate military and intelligence options to fight a rising tide of hatred among 1.3 billion Muslims.

Michael Scheuer is a 22-year veteran of the CIA and the author of Imperial Hubris: Why the West Is Losing the War on Terror. View all posts by Michael Scheuer