As U.S. citizens mark their annual celebration of patriotism, the Fourth of July holiday, they might do well to also ponder the specter of two other “isms” that threaten the Republic’s durability and strength raised by two important books published over the past year. 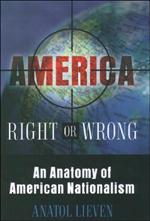 America Right or Wrong: An Anatomy of American Nationalism, by Financial Times columnist Anatol Lieven, warns that the U.S. polity is turning its back on the civic patriotism of the “American Creed” of liberty, the rule of law, and political egalitarianism in favor of an “American antithesis,” a radical and vengeful nationalism that recalls the worst tendencies, and mistakes, of Wilhelmine Germany just before World War I.

The New American Militarism: How Americans Are Seduced by War, by retired Army Col. Andrew Bacevich, contends that the country’s recent love affair with force and exaltation of the soldier threaten both the military institution, as policymakers expect it to solve ever more problems, but also the republican ideals on which the U.S. was founded. 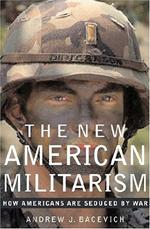 “Of all the enemies of public liberty,” Bacevich quotes former President James Madison as writing in 1795, “war is perhaps the most to be dreaded, because it comprises and develops the germ of every other. … No nation could preserve its freedom in the midst of continual warfare.”

Published by Oxford University Press, both books offer some of the most trenchant and original criticism of the trajectory of U.S. foreign and military policy that has surfaced since the U.S. invasion of Iraq in March 2003.

Although their analyses of that trajectory – and the larger social and cultural trends that underpin it – would not be unfamiliar to left-wing analysts, the two authors could not possibly be confused with the “blame-America-first” crowd that has been scapegoated so frequently by the U.S. Right since the Vietnam War.

Indeed, Bacevich, a West Point graduate, Vietnam veteran, and career soldier, used to write for the neoconservative Weekly Standard and National Review, while Lieven, a British subject who has more recently sought to revive the “ethical realism” of the post-World War II era, betrays a deep affection for the U.S., gained in part from a year as a high school exchange student in Alabama. Both write from a deep sense of concern about where the United States is headed.

To Lieven, now based at the New American Foundation after several years at the Carnegie Endowment for International Peace, two kinds of nationalism have long wrestled over the country’s soul – a civic nationalism, or “American thesis,” based on universalist principles of the Enlightenment and that animated the Declaration of Independence 229 years ago, and the far more aggressive and exclusivist nationalism, or “American antithesis” that harks back to the Protestant Reformation and the religious wars that it sparked.

While the thesis is optimistic by nature and extols reason and the rule of law, the antithesis in many ways is anti-modern, radical, deeply alienated “from the supposed ruling elites and dominant culture,” and even paranoid. Through most of U.S. history, it has also been deeply racist, not just toward blacks, but toward most minority groups, including Catholics and Jews.

This belief in the fundamental goodness of America – which actually runs from the first Pilgrims straight through Woodrow Wilson to George W. Bush – naturally reinforces everything that many Europeans and much of the rest of the world find objectionable about U.S. foreign policy.

This is namely its moral absolutism, messianism, and a contempt for history that can have grave consequences, particularly when it is held by the world’s sole superpower after a period in which it triumphed over “evil” – first the Nazis, and then the Communists during the Cold War.

Many, if not most U.S. citizens, combine the two kinds of nationalism in varying degrees and proportions in themselves, although, with the “southernization of the Republican Party” since the 1960s, “the party has tended increasingly to embrace and become identified with the antithesis,” even while it extols the myths of the American thesis, according to Lieven.

This process has been boosted over the past 30 years by two groups, in particular: the Christian Right and its Christian Zionist leaders, such as Jerry Falwell and Pat Robertson; and the neoconservatives, who have played a key role both by cloaking the angry and exclusivist outlook of the far Right in the universalist rhetoric of the “American Creed” of democracy and freedom (thus attracting support from internationalist liberals who should know better) and by mounting a sustained attack on mainstream Republican realism as immoral.

In the most controversial but ultimately persuasive section of the book, Lieven argues that the same two groups have done much to tie U.S. policy to Israel’s right-wing governments in much the same way that Slavic nationalists tied imperial Russia to Serbian radicals on the eve of World War I.

“Insofar as American nationalism has become mixed up with a chauvinist version of Israeli nationalism,” according to Lieven, “it … plays an absolutely disastrous role in U.S. relations with the Muslim world and in fueling terrorism.”

Lieven stresses that there have been periods in U.S. history – most recently during the McCarthy era – when the U.S. antithesis has gained the upper hand in the body politic, but each time, the pendulum swung back saving “the nation from falling into authoritarian rule or a permanent state of militant chauvinism.”

Now, however, he is less optimistic, warning that another devastating terrorist attack could provoke a permanent state of siege and that the continuing stresses on the middle class in coping with globalization and economic change could swell the ranks of the antithesis’ angry, aggrieved, and aggressive.

Bacevich, director of the Center for International Relations at Boston University, is similarly concerned about the fate of the Republic and likewise sees the Christian Right, whose own much-requited love affair with the military after the Vietnam War is detailed in the book, and the neoconservatives as bearing heavy responsibility for “creeping militarism.” Both are subjects of entire chapters.

But he stresses that blaming a particular sector or group, or even Bush himself, misses the bipartisan and cultural nature of the phenomenon. Hollywood, a generation of “defense intellectuals,” particularly neocon prince Richard Perle’s mentor, Albert Wohlstetter, and the Democratic administrations of Jimmy Carter (“the Carter Doctrine” to protect the Persian Gulf) and Bill Clinton, have all made important contributions, according to Bacevich.

He writes with real anger about the role played by former Secretary of State Colin Powell first in promulgating the doctrine that bears his name – a doctrine that encapsulated all the bitter lessons of the Vietnam War – and then in acquiescing in its wholesale abandonment over a period of 15 years.

The key moment, according to Bacevich, came in the early 1990s when the collapse of the Soviet Union – Washington’s only peer rival – should have brought about a major reassessment and reduction of Washington’s global military posture.

The first Gulf War – and the interests of the military-industrial complex and its ideological fellow-travelers – put paid to any such possibility, and, in the wake of Desert Storm, it suddenly seemed that the armed forces, fully recovered from Vietnam, could do just about anything it wished, and, given technological advances, in ways that appeared on television to be more or less bloodless, at least for the home team.

The distance between “coercive diplomacy,” as in Kosovo, and preventive warfare, as in Iraq, is not as great as some Democrats would like to think.

“[A]t the end of the Cold War, Americans said yes to military power,” he writes. “The skepticism about arms and armies that informed the original Wilsonian vision, indeed, that pervaded the American experiment from its founding, vanished. Political leaders, liberals and conservatives alike, became enamored with military power.”

The result: “To a degree without precedent in U.S. history, Americans have come to define the nation’s strength and well-being in terms of military preparedness, military action, and the fostering of (or nostalgia for) military ideals,” according to Bacevich, who writes as a very knowledgeable, if very worried, insider on the military’s own thinking from the disaster of Vietnam to the anticipated disaster of the open-ended “global war on terror.”

As a reading of the two books makes clear, the nationalism and militarism addressed, respectively, by Lieven and Bacevich are in reality closely related, but the book’s distinct perspectives and insights make them a particularly compelling combination – especially for a July 4 weekend.