The times, they sure are a changin.’ Why, it seems like only yesterday – although it was December 16, 1998 – that Nancy Pelosi opined:

“As a member of the House Intelligence Committee, I am keenly aware that the proliferation of chemical and biological weapons is an issue of grave importance to all nations. Saddam Hussein has been engaged in the development of weapons of mass destruction technology which is a threat to countries in the region and he has made a mockery of the weapons inspection process.” 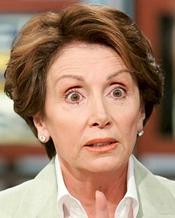 Today, however, she’s singing a different tune: “There was never anything in the intelligence that said Iraq posed an imminent threat to the United States, never.”

When Bush launched the war, both the Senate and House adopted resolutions ostensibly to “support the troops,” but in reality endorsing the war, the bombing, and the policies of the Bush administration. The Senate voted 99-to-nothing for a resolution that “commends and supports the efforts and leadership of the President, as Commander in Chief, in the conflict against Iraq.”

The House version, co-authored by Nancy Pelosi and Tom Delay (what a tag-team!), passed 392-11, with 22 abstentions. It went much further than the Senate version in supporting Bush, not only claiming that Iraq was in “material breach” of UN resolutions, but also going so far as to offer “unequivocal support” for Bush’s “firm leadership and decisive action in the conduct of military operations in Iraq,” which it described as “part of the ongoing Global War on Terrorism.” Eleven Democrats voted against the resolution, averring that they could support the troops without supporting this tripe. As American bombs were falling on Iraq, killing thousands, Pelosi declared,

“Saddam Hussein is a menace to his own people, and a threat to the peace and stability of the entire region. As our soldiers risk their own lives to secure the lives and liberty of others, we pledge to repay their courage by guaranteeing that we will spare no resource and no effort to make sure nothing stands between them and victory.”

She is fulfilling that pledge today: the bill she is trying to strong-arm though the Democratic Congress, the “U.S. Troop Readiness, Veterans’ Health and Iraq Accountability Act,” gives the President more money to expand the military than he asked for. It also establishes benchmarks that would supposedly regulate the number of troops in Iraq and their mission, leading to a complete withdrawal by the summer of next year. The only problem is that these benchmarks can be unilaterally waived by the President, with Congress in only an advisory role.

The Pelosi bill, in short, is the most partisan, most dishonest piece of legislation possible, under the circumstances. With one hand it proffers a veritable cornucopia of goodies – benchmarks on “troop readiness,” an end to extended deployment, “rest periods” between deployments, and, most delectable of all, a deadline of October 1, 2007, for the Iraqis to get their act together, or else we’re out of there.

With the other hand, however, the Pelosi-crats hand the ball back to the Bush administration, ensuring that nothing will come of it but a campaign issue for the Democrats. It’s all smoke-and-mirrors. News accounts insist the Pelosi bill requires a complete U.S. withdrawal, except it just isn’t true: as currently written, the legislation provides for the stationing of considerable forces in Iraq provided they are (supposedly) going after al Qaeda, or other terrorist organizations with “global reach.” We’re just going to have to take this administration’s word for it if – or, rather, when – the President makes short shrift of Pelosi’s feeble benchmarks.

Listen to the language of the “antiwar” Pelosi-crats: they never say we ought to withdraw from Iraq – instead, they insist, we should “redeploy.” Which means we’ll bide our time, and wait for the opportunity to pounce once again on whatever practically defenseless Middle Eastern nation is targeted next.

At the beginning of this conflict, Pelosi promised: “I don’t have any intention of second-guessing the strategy of the commander in chief and those who are waging this war.” This from someone who now wants to micromanage the U.S. military campaign in Iraq – down to the number of troops, and how they’re to be deployed.

I won’t bore you, dear readers, with a long disquisition on Pelosi’s many wobbles on the Iraq question: suffice to say it is dizzying. Anyone can change their mind: but usually they acknowledge the change. We have seen no such acknowledgement from the Speaker, and I wouldn’t hold my breath: her arrogance is legendary. Now that the war she endorsed, and refused to “second-guess,” is unpopular, the Speaker has decided she’s against it – but not so much that she is willing to cut off the funding.

With the introduction of the “U.S. Troop Readiness, Veterans’ Health and Iraq Accountability Act,” disguised as an “antiwar” measure, this is no longer merely Bush’s war. By approving funds to continue the conflict, after having been voted into office largely on account of their ostensible opposition to it, Pelosi & Co. have made it their war, too. The party leadership’s role as the “left” wing of the War Party is underscored by the Speaker’s threats to punish those genuinely antiwar Democrats who oppose this bill.

The idea that the Democrats are any kind of “peace party” is belied by the latest action of the Speaker in regard to this bill, who excised a provision that would have required the President to come to Congress for permission to attack Iran. And, gee, what a coincidence, but that this was done right after the recent conference of the American-Israel Political Affairs Committee, where Israeli Prime Minister Ehud Olmert declared:

“I know that… all of you who are concerned about the security and the future of the State of Israel understand the importance of strong American leadership addressing the Iranian threat, and I am sure you will not hamper or restrain that strong leadership unnecessarily.”

He forgot to add: or else. Not that he had to: Nancy skeedaddled back to her office so fast that she must have broken the sound barrier – and the offending passage was cut from the bill.

Yes, the times, they are a changin’ – but not in a good way. Nancy and the Democrats just gave Bush the green light to start bombing Tehran at Olmert’s earliest convenience – so get ready for the Second Great Middle East War, brought to you by the leadership of both “major” parties.

Correction: In Wednesday’s column I made reference to an article by Scott Ritter in “Arms Control magazine”: the correct name of the magazine is Arms Control Today. Sorry about that.