The revelation in Bob Woodward’s new book, State of Denial, that Condoleezza Rice (then national security adviser to the president) brushed off CIA chief George Tenet when he came to her a few months before 9/11 with dire warnings of an imminent terrorist attack, is blasting this administration’s credibility out of the water – and seriously undercutting the “official” 9/11 narrative. 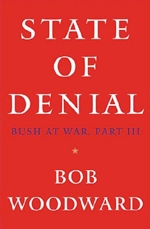 That narrative, as approved by the 9/11 Commission and certified by all the most “responsible” pundits, goes something like this: for at least five years, 19 al-Qaeda operatives traveled to and fro within the United States, taking flying lessons, and going completely undetected, until, one bright September day, they hijacked four airliners and managed to ram two into the World Trade Center and another into the Pentagon. The biggest terrorist attack in our history was carried out – according to the conspiracy-theory-free version of the event – with no state support [.pdf], and no warning. This administration never saw it coming – that has been the “defense” proffered by the Bush regime and its few remaining apologists as questions about their competence and culpability are raised.

An odd apologia indeed: We’re clueless, therefore blameless. If such Bizarro World “logic” evades your understanding, that’s just because you’re a member of the “reality-based community” – a special interest group whose lobby doesn’t wield much clout in Washington.

As it turns out, however, there were warnings – and plenty of them – from foreign intelligence agencies and from within our own government, including one from the head of the CIA, who was accompanied at his July 2001 meeting with Rice by another top CIA official, Cofer Black, cited by Woodward as saying: “The only thing we didn’t do was pull the trigger to the gun we were holding to her head.”

Rice, it seems to me, is the weak link in the chain of deception that holds the official narrative together: you’ll remember her extreme reluctance to testify at the 9/11 Commission hearing, and her subsequent revelation, when finally shamed into making an appearance, of a presidential daily briefing headlined “Bin Laden Determined to Attack in U.S.” And now this.

The Bush administration just wasn’t focused on the possibility of a terrorist attack, as Woodward relates:

“Besides, Rice seemed focused on other administration priorities, especially the ballistic missile defense system that Bush had campaigned on. She was in a different place.”

That place was Iraq. In the summer of 2001, as the propaganda campaign on behalf of regime change in Iraq began to take off, the Bush administration was embroiled in an internecine struggle pitting the neoconservatives against the remnants of the “realists” left over from the days of Bush I. As Joshua Micah Marshall chronicles it:

“The hawks came in wanting to put regime change at or near the top of the Bush administration’s foreign policy agenda. What they didn’t figure on was how much of a hurdle Colin Powell, and his deputy, Richard Armitage, would present. … In bureaucratic battles over the summer of 2001, Powell and Armitage made sure that ‘regime change,’ though nominally administration policy, lacked teeth.

“All of that changed after September 11….”

Rice has always played the role of a neocon-facilitator. In the run-up to war, her office – in the person of her chief adviser, Stephen J. Hadley – gave a pass to every tall tale that came out of the neocons’ Pentagon policy shop, including the Mohammed Atta-in-Prague story and the Niger uranium forgeries, and assiduously blocked any reports – including those from Richard Clarke, former counter-terrorism chief – indicating that the alleged Iraq-9/11 connection was bogus.

Clarke’s report, which concluded that Iraq had nothing whatsoever to do with the events of 9/11, had the joint imprimatur of the CIA and the FBI. It got no further than Condi Rice’s office, where it elicited a brief but sharp rebuke from “the national security adviser or deputy” – “Wrong answer,” went the note at the top of the Clarke report. “Do it again.”

Condi certainly gave Tenet and Black the wrong answer when asked to take immediate action against al-Qaeda in the summer of 2001: unfortunately, this administration can’t “do it again.” But before Democrats seek to take partisan advantage of this, they need to be reminded that the Clinton administration – for all the brouhaha over the much-vaunted terrorist threat, and the billions spent on supposedly preventing it – also proved supremely indifferent to the danger posed by bin Laden & Co.

As Michael Scheuer, the head of the CIA’s al-Qaeda unit until 1999, relates, the Clinton administration had plenty of opportunities to move against bin Laden, and there was actionable intelligence as to his whereabouts. A plan had been drawn up to go after him in his family compound in Afghanistan, and was all set to go – but was called off at the last minute by Clinton administration officials for the fear of inflicting civilian casualties, as there were several women and children reportedly in the encampment.

That all of this is coming up around election time is hardly coincidental: both parties want to use 9/11 for their own political purposes. The Democrats want to show that a Republican administration was asleep at the wheel and largely disinclined to pay attention to its own intelligence, and the Republicans underscore the haplessness of the Clintonites, who were too busy bombing some of the oldest cities in Europe to pay attention to the deadly threat posed by bin Laden. We have come to a unique moment in the world of Washington politics when we can say that both parties are right. Yet this hardly gets to the heart of the matter, and is, at best, of limited help in preventing future terrorist attacks on American soil.

If we look at the organizational history of al-Qaeda, it is clear that it was created, in large part, by the U.S. during the war of “liberation” (version 1.0) against the Soviet occupiers. The Americans facilitated, encouraged, and otherwise collaborated with bin Laden until he turned against them. The 9/11 terrorist attacks were “blowback” of singular ferocity, the unintended consequence of a foreign policy founded on the principle that no country is too distant or too obscure to escape our ministrations. The principle of global interventionism informs and directs the policymaking apparatus no matter which party is in power – and that is the problem.

This is the larger context of the 9/11 attacks, but there is much to be learned from a close-up look at what was going on in the months and weeks leading up to that fatal day. There was all that “chatter” that set Tenet, Black, and Richard Clarke on their futile mission to alert the president and his top advisers to the imminence of the threat. And, it turns out, there was a lot of static in the intelligence pipeline – including a series of attempted penetrations of secure U.S. government facilities by mysterious Israeli “art students,” which at least one intelligence official describes as a “diversion.”

The 9/11 narrative contains all kinds of weird anomalies, such as this – and not to mention this, which has one of the five Israelis apprehended in the New York metropolitan area who were observed jumping for joy at the downing of the World Trade Center admitting that (1) they were accused of being Mossad agents, and (2) “Our purpose was to document the event.” Sounds like at least a hint of foreknowledge to me, but then nothing of this was so much as mentioned in the 9/11 Commission report. U.S. government officials forced to comment on reports in the mainstream media that the Israelis had at least some foreknowledge of the 9/11 terrorist attacks dismissed them as an “urban myth.”

There is much we don’t know about the events surrounding 9/11, and getting information out of this administration has been like pulling teeth. Now we know why Condi was so unwilling to even appear before the 9/11 Commission. Her conundrum is to convince the public that she somehow “forgot” an unusual meeting with Tenet and Black two months before 9/11 in which she demurred when urged to take immediate action against the threat posed by bin Laden. As Max Cleland put it when he resigned from the Commission to protest the administration’s stonewalling, “They will never give the full story.”

They may not give it out freely, but the full story is there, waiting to be discovered. And slowly but surely it will come out, all of it – unless and until another terrorist attack makes it almost irrelevant.