All this folderol about how the neoconservative moment is over, and the War Party totally discredited, is just so much wishful thinking, as the prospect of John F. Lehman‘s nomination as CIA chief makes all too clear. Rumor has it that Porter Goss is out – too partisan – and Lehman is leading the pack. If so, this is a testament to the neocons’ bureaucratic staying power. 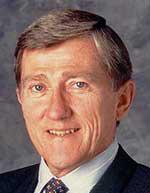 Formerly an investment banker with Paine Webber, Inc., Lehman was President of the Abington Corporation, (1977-81), a lobbying and consulting firm, a staff member of the National Security Council under Henry Kissinger, and deputy director of the U.S. Arms Control and Disarmament Agency. He has been associated with the neoconservative network in Washington since the good old days of Iran-Contra. In 1981, President Ronald Reagan appointed Lehman Secretary of the Navy: he served until 1987. In 1983, a mysterious package of documents arrived at the New York Times, a fortuitous delivery that led to a piece by reporter Jeff Gerth in which Lehman, along with Richard Perle, was accused of accepting payments from Israeli arms dealers Shlomo Zabludowicz and his son, Chaim Zabludowicz, who were Perle’s clients in 1980. They paid $90,000 to Abington Corporation: Perle kept $50,000, while Abington got the rest.

Lehman blamed his wife: Perle said he did the work for the Zabludowicz clan before he was employed by the government. Whatever.

In any case, as per the custom in Washington, Lehman and Perle survived the scandal, as neocons always do, and lived to fight another day.

Lehman’s most recent position has been as a member of the 9/11 Commission, where he excoriated Richard Clarke for writing a book, and went on Meet the Press declaring that a prominent member of Saddam’s militia had been identified as a member of Al Qaeda, confusing two different Arab names in the process and getting it thoroughly wrong. The Washington Post pointed out the discrepancy to Lehman, who brushed it aside, claiming it really made no difference: he stood by his claim.

In the early 90’s, Lehman joined up with the Committee on U.S. Interests in the Middle East, a neocon front group organized by Richard Perle, Elliott Abrams and Douglas J. Feith, and headed up by Frank Gaffney. The Committee lobbied for more U.S. tax dollars for Israel, and, among other activities, in 1992 bought a full-page ad in the New York Times viciously denouncing President George H. W. Bush as an appeaser for pressuring then-Israeli prime minister Yitzhak Shamir to open negotiations that eventually led to the Oslo process:

The principal founders and sponsors of the Committee, which broke with Dubya’s dad over this issue, are now in charge of U.S. foreign policy, and of the last two holdouts – the Department of State and the CIA – it looks like they’re about to take Langley.

Although long associated with the War Party through his connections to Ball Aerospace Technologies – a major manufacturer of NASA and Pentagon satellites – and the board of the Center for Security Policy, a neoconservative redoubt, Lehman seems to be trying to distance himself from the neocons and their foreign policy views now that he’s up for the CIA post. However, his record speaks for itself.

He has long exhibited a Laurie Mylroie-like obsession with Iraq, claiming, for instance, that Saddam was behind the bombing of the USS Cole in 2000. The bombing, as it turned out, was the work of al-Qaeda, and had nothing whatsoever to do with Iraq. A few days after the 9/11 terrorist attacks Lehman signed an open letter calling on the President to attack Iraq.

Keeping in mind his demonstrated inability to keep Arabic names straight, do we really want to appoint to the CIA’s top post a man so often proved wrong?

The bureaucratic brawl that took place between the CIA and the Pentagon in the prelude to war is now being resumed with new ferocity: the latter’s policies may be discredited, and Iraq may be in ruins, along with the alleged “liberation,” but just because they’re losing the war on the overseas front doesn’t mean the neocons can’t ultimately carry the day in Washington.

Former counter-terrorism czar Richard Clarke, and the anonymous author of Imperial Hubris, along with a whole raft of former U.S. diplomats and government officials, have been on the offensive lately, targeting the neocons as duplicitous seducers who had their way with us and then left American soldiers and taxpayers with the burden of a costly occupation. The Lehman boomlet shows, however, that, far from being on the run, the neocons are counterattacking.

The question now is: will the White House wait until after November to make the CIA appointment? By then, of course, it may be too late. This is a purely political calculation for the Republicans, but it seems to me they are in a position to act boldly. After all, the White House can always accuse the Democrats of making a partisan political issue out of a vital matter of national security if they raise a fuss.

Politics may prevent the Democrats from raising a proper ruckus, yet they’ll no doubt be shocked – shocked! – if CIA Director John Lehman, in probing the source of our pre-war “intelligence failure,” goes easy on his own brother. But don’t say I didn’t warn you….