Michael Moore’s new film embodies all the virtues, and vices, of the American left at the present moment: it is trenchant and wrongheaded, serious and superficial, startlingly original and horribly clichéd. There is humor, sophomoric as well as dark; emotion, spontaneous and staged. Fahrenheit 9/11 is, in short, the best of films, and the worst of films. It is, in effect, two entirely different movies.

Oddly, all the bad stuff occurs in the first 20 minutes or so, as if Moore just had to get the leftie clichés, the partisan Democratic tirades, and the cheap shots out of his system before he could get down to the serious business of telling how and why George W. Bush and his minions capitalized on 9/11 and lied us into war.

The movie starts out on election night, 2000, and reiterates the mythology of a "stolen" election the way a Catholic might recite the Stations of the Cross. The Supreme Court. Blah blah blah. Jeb Bush. Blah blah blah. Gore really took Florida, but the racist Republicans threw out the black vote and the rest is history. In light of how Moore later shows his admiration for the courage and innocence of the people who serve in our armed forces, it’s odd that he doesn’t mention the organized efforts by the Democrats to disqualify as many military ballots as possible. 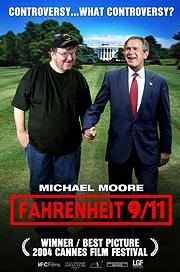 But worse is yet to come. Moore spends a good 15 minutes constructing a conspiracy theory that is not only incomprehensible, illogical, and shamelessly demagogic: it is presented in a manner that is no doubt extremely offensive to any Arabs who might be in the audience, and might even be perceived by them as borderline racist as well.

We are told that, in the hours immediately after 9/11, "142 Saudis were allowed to leave the country," and that among them were – gasp! – members of the bin Laden family. What, then, would Moore have preferred? Should the president have ordered the rounding up of all Saudis on American soil? He drags some "former" FBI official on screen to complain that we should have at least asked them a few perfectly innocent questions – and, yes, detained them – because, heck, even the most fervent "civil libertarian" couldn’t object to that, at least not under the circumstances. Keeping them in the U.S. is supposed to be justified because, well, they’re all members of the same family as bin Laden, aren’t they? As Jane Mayer points out, however, we’re talking about a large clan that "may number as many as six hundred, when one counts all the relatives." Are all these people automatically terrorists – and didn’t they have much to fear from unreasoning hatred and a desire to exact revenge?

Moore’s conception of al-Qaeda is pure Hollywood: it’s The Godfather, only with Saudi headdresses. Terrorism, in Moore’s view, is simply the bin Laden family business. Oh, they’re a bad lot, those bin Ladens. When they aren’t spawning terrorist offspring, like Osama, they’re investing in global conglomerates, like the Carlyle Group, along with the president’s father. Like the Israelis, who bulldoze the houses of suspected terrorists, and arrest entire families for the actions of a single sibling, Moore wants to hit the whole clan – and, it often seems, the whole Saudi nation.

As Moore reminds us that 15 of the 19 hijackers were Saudi, the camera focuses on their dark, Semitic features, as we see shot after shot of unctuously smiling princes paraded before our eyes. Men in Saudi garb are greeted by the president’s father, who commits the horrible sin of treating them warmly. From time to time, author Craig Unger is dragged onstage, uttering vague libels against the Bush family. The smoking gun supposedly linking the Bush crime family to the bin Laden Mafia is … George W. Bush’s National Guard discharge papers!

It seems Bush had been in some trouble, along with one James R. Bath – who, it turns out, later became the manager of the bin Laden family’s Texas holdings. Bath’s name had been on the original document, but was mysteriously expunged. And that, of course, proves … nothing. Yet it is uttered in the tone of a revelation that is supposed to be self-evidently shocking.

Just when I had given up all hope, and resigned myself to enduring this farrago of crude innuendo and guilt-by-association to the bitter end, the movie did a 180-degree turnaround.

Moore does a masterful job of covering the run-up to war. Sound-bites from administration figures that clearly expose them as serial liars are juxtaposed with horrific footage of Iraqi civilian casualties and wounded. The narrative clearly and succinctly shows how American anger over 9/11 was diverted away from Osama bin Laden and al-Qaeda, and redirected at Iraq. Richard Clarke, the former counter-terrorism czar, is utilized to good effect, and testimony from the 9/11 Commission demonstrating the administration’s disinterest in bin Laden, both prior to and after the terrorist attacks, is presented with a minimum of editorial comment, and to great effect: the facts are damning in themselves.

The movie takes off like a shot, at this point, as Moore documents and disdains the vital role played by the "mainstream" media in the orchestrated campaign of deception that preceded the invasion. We are treated to Dan Rather solemnly proclaiming that he wants us to "win" in Iraq, and a female newscaster getting all hot-and-bothered as she describes the adrenaline rush of being with the troops, so hopped up by her own pro-war fervor that she is fairly swooning. He also doesn’t shy away from indicting the complicity of the Democrats: Senate Democratic leader Tom Daschle’s speech endorsing the attack on Iraq is shown, along with the laziness and cynicism that permitted the "PATRIOT" Act to be passed without even being read by the members of Congress, with one Democrat in effect saying "You don’t really think we read this stuff, do you?" 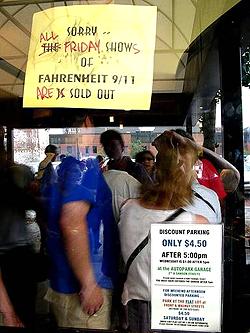 Reading the PATRIOT Act aloud as he circles Capitol Hill in a sound truck, Moore effectively dramatizes the utter powerlessness (and cluelessness) of our esteemed Solons. In another effective stunt aimed at our elected representatives, he approaches members of Congress outside the Capitol building, earnestly explaining that he is trying to recruit their children into the military. Instead of lecturing us, he entertains us – and gets his point across all the more pointedly and effectively.

What really comes across in this film is Moore’s feeling for American soldiers in the field, rooted, I believe, in his empathy for ordinary people, and – dare I say it? – his unambiguous patriotism. He goes inside Walter Reed Army Hospital, in Washington, and interviews the wounded: amputees, laying in their beds, full of pain and determination to get on with their lives. He interviews soldiers in the field, who wonder what we’re doing over there. "It’s not that easy to conquer a country," says one, his voice full of wonder.

In a scene that, for me, symbolizes the tragedy of American foreign policy, a fresh-faced U.S. Army officer solemnly intones that we’re in Iraq to enlighten the people with "the ideals of American freedom and democracy." In the next scene we are shown the invasion of an Iraqi home by their American "liberators," who kick down doors, treat everyone with contempt, and play the part of swaggering conquerors to the hilt. It is Christmas Eve, and the occupiers are out on a mission, singing:

Things get darker when we are shown the treatment of Iraqi prisoners. In a presentiment of the Abu Ghraib horror show, Moore has footage of American GIs cruelly abusing their captives. It’s strange that in an army where homosexuals are officially verboten, we see a U.S. soldier touching the genitalia of an Iraqi prisoner who is wrapped up, it appears, in a blanket, and bound. The soldiers snicker. "Oh, look, he’s got a hard-on!" We see prisoners being hooded, a procedure that seems almost ceremonial: what’s clearly going on here is the ritual humiliation of a nation.

During the course of this nearly two-hour documentary, the entire panoply of left-wing conceptions about this war, and this president, are put on display and imprinted on every frame, from the ridiculous to the sublime. The end result is more positive than negative, but, as much as I enjoyed the final two-thirds, I couldn’t help feeling a bit disgruntled.

Okay, so they lied us into war – but why? The film fails to provide an answer beyond the usual leftist shibboleths: the president is a dunce, the Saudis own the world, the rich are evil, and the poor are inherently good. The closest Moore comes to an overall explanation is his Saudi conspiracy stuff, which is utter and complete nonsense: there is no evidence of Saudi government involvement in 9/11, as the 9/11 Commission concluded. The irrationality of this Saudi conspiracy theme is further evidenced by the terrorist attacks on the Kingdom and its authority. If bin Laden is Riyadh’s creature, then why is al-Qaeda attacking the monarchy?

When it comes to identifying the enemy, Moore (like so many of his ideological brethren) misses the point almost entirely. Throughout an entire movie about the rise of George W. Bush and the origins of the Iraq war, the word "neoconservative" never once passes anyone’s lips. The leftist insistence on abstract "forces," instead of the actions of specific individuals, overrides everything: in the end, Osama bin Laden is just another rich guy, like Bush and his cronies.

Of Michael Moore, one might say: when he is bad, he is very very bad – and when he’s good, he’s memorably effective. That this is also true of the left-liberal analysis in general is what makes this film interesting, especially for those of us who identify as libertarians. As a barometer of the times, the popularity of Fahrenheit 9/11 speaks volumes about the hunger of the American people for a level of discussion the philistines among us have routinely derided as virtually nonexistent. The audience was filled with young people, and this is a good sign. Rebellion is in the air. The events of the past three years have empowered our rulers, and given the War Party unprecedented impetus; but they have also provoked a countervailing reaction, a sea change in the intellectual atmosphere bright with promise, and yet fraught with error.

On balance, however, the new upsurge of dissent on the Left is a very good thing. Because when it comes to exposing injustice, the Michael Moores of this world have no trouble understanding the stakes: in the eternal battle of Liberty versus Power, they are on the right side of the barricades.