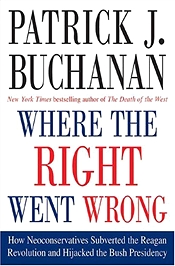 Just kidding of course, but after I watched Pat on Meet the Press Sunday morning, I e-mailed him: "Have you ever thought of running for president?" When he did last time out I supported him, up to the point where I thought he went bonkers on China and trade. Now out of elective politics, he is getting better all the time as a "wise man." He sent me his brand new book last week, Where the Right Went Wrong, and I put it on a pile of books I’ve promised to read, but after reading the first few pages I read the whole thing. Except for the section on trade, which is still soft, it is easily the best of his many books that I have read (with many never finished).

Tim Russert invited him on his NBC show along with Sen. Bob Graham of Florida and former House Speaker Newt Gingrich, mainly to discuss Iraq. I’ve not done this before, but decided to cut Graham and Gingrich from this memo and give you pure Pat. They were okay from their viewpoints, but I think Pat stole the show.

MR. RUSSERT: Pat Buchanan, in your book, Where the Right Went Wrong, you write the following: "In 2003, the United States invaded a country that did not threaten us, did not attack us and did not want war with us to disarm it of weapons we have since discovered it did not have. … Now our nation is tied down, our Army is being daily bled in a war to create democracy in a country where it has never before existed. … With the guerrilla war, U.S. prestige has plummeted."

You go on to write that Iraq was, "…the greatest strategic blunder in 40 years, a mistake more costly than Vietnam."

MR. PAT BUCHANAN: Certainly, Tim, I believe it is an unnecessary war; it is an unwise war. The United States, by invading that country and taking over its capital, we have inflamed the entire Middle East and Arab and Islamic world. American prestige and support for the president and the United States has never been lower in that part of the world. And Mr. Rumsfeld’s question has been answered.

He asked, "Have we been creating more terrorists than we are killing?" When he said that, some 5,000 insurgents were said to be in Baghdad by General Abizaid. The latest count is 20,000. I believe this war itself is creating a pool, a spawning pool out of which Osama bin Laden can draw recruits. I think that there has been nothing that has done more to put Osama bin Laden, if you will, in the mainstream of the Arab cause of nationalism than what appears to the Arabs to be to be a near-imperial adventure by the United States in Iraq.

MR. RUSSERT: Pat Buchanan, we are now hearing on the wires that Mr. al-Douri, the number-two to Saddam Hussein, has been captured [This turns out to have been untrue – Ed.]. So we now – and there he is on the screen. We now have a situation where Saddam Hussein and his number two are in captivity. Is the world not safer without them presiding over the country of Iraq?

MR. BUCHANAN: Well, certainly, the Iraqi people are probably safer as a consequence of the American liberation and overthrow of Saddam Hussein. The problem, Tim, is this: Now, that Saddam Hussein is gone, what we have is a situation in Fallujah and Ramadi where Sunni fundamentalists are in control and the Shias are rising up in the south, and we – and Americans are dying, and we do not have enough troops, in my judgment, in place to win this war. What you could have here and what the risk is: that having overthrown this one devil, we could have seven devils enter in his place. This could turn into a failed state in chaos and civil war, where the United States is forced out or either forced to double our troops in there. And if that happens, Tim, we’ve got ourselves a hellish situation there. It was not a problem. Saddam was a criminal and a thug and a brute, but he was no threat to a country that flew 40,000 sorties over Iraq in 10 years. He did not shoot down a single one.

MR. RUSSERT: Would you send more American troops or would you withdraw?

MR. BUCHANAN: This is the question that, I think, should be put to John Kerry and the president of the United States in the debates: "Mr. President, if John Abizaid comes to you and says, ‘We can’t do it with the present complement, we need 75,000 more American troops’ – what would you do, John Kerry? What would you do, George W. Bush?" If it were up to me, Tim, I think I would execute a strategic withdrawal from Iraq. I think it was a terrible mistake. We’re going to pay consequences one way or the other. And my feeling is probably it would be better for us in the long run if we withdrew.

MR. BUCHANAN: Who promised us, Tim, a cakewalk? Who promised the president a rose garden? Who failed to prepare for what would happen after we took Baghdad and Iraq? Who are the men responsible for this and why has the president of the United States not removed any of them? Most of them over in the Pentagon are the neoconservative war hawks who planned, prepared and propagandized for a war in Iraq as far back as 1996. This was their class project. I believe they imposed it upon the president. The president bears full responsibility for accepting it. But why he has not removed these people from office, I cannot for the life of me understand.

MR. RUSSERT: Pat Buchanan, let me just jump in here, because you . . . have written something in your book that I think is going to be quite controversial and I want to put it on the screen and share it . . . with you and our viewers and give a chance for our group to respond to it. "U.S. dominance of the Middle East is not the corrective to terror. It is a cause of terror. Were we not over there, the 9/11 terrorists would not have been over here. And while their acts were murderous and despicable, behind their atrocities lay a political motive. We were attacked because of our imperial presence on the sacred soil of the land of Mecca and Medina, because of our enemies’ perception that we were strangling the Iraqi people with sanctions and preparing to attack a second time, and because of our uncritical support of the Likud regime of Ariel Sharon" in Israel.

Are you suggesting that our alliance with Israel is one of the reasons that we were attacked on September 11?

MR. BUCHANAN: Sure. That’s one of the reasons given by Osama bin Laden. In his fatwa of 1998, he wrote that there are three causes of the problems and three causes for a declaration of war by all Arabs and good Muslims against the United States. One, America’s imperial presence on the sacred soil of Saudi Arabia. Secondly, the sanctions policy against Iraq which was persecuting and basically starving, he said, the Iraqi people, and we were planning another invasion. Third is the United States’ uncritical support of the Ariel Sharon regime in Israel, which he argued is persecuting the Palestinian people.

In my judgment, Tim, this one-sided support for Sharon, the refusal to condemn that wall snaking through the West Bank, the agreement to support Sharon’s claim to virtually half of the West Bank, this has caused enormous hostility and animosity and hatred for this country in that part of the world, not just among the Palestinians. And if we want to drain off some of this hatred, this venom against us, we have got to adopt a more evenhanded policy here. We have got to stand up for the same rights for the Palestinian people, a homeland, a nation, a state of their own, a viable one, on the land their forefathers farmed for a thousand years, because those are first our principles and secondly, that is in the national interest of the United States of America. I don’t care what Ariel Sharon believes.

MR. RUSSERT: They are not attacking us because they hate us and hate our culture?

MR. BUCHANAN: This is the fundamental point. Are they attacking us because of who we are and what they believe or are they attacking us because of what we do? I believe it is our policies, not our principles that are causing these attacks. Osama bin Laden wasn’t sitting in some cave in Afghanistan and stumble on the Bill of Rights and go bananas. It is because of what we are doing. Most fundamentally, it wasn’t Israel number one. Number one, Saudi Arabia, female soldiers, American soldiers sitting there on the land of Mecca and Medina.

MR. BUCHANAN: We also need to investigate whether there is a nest of Pollardites in the Pentagon who have been transmitting American secrets through AIPAC, the Israeli lobby, over to Reno Road, the Israeli embassy, to be transferred to Mr. Sharon. Now, I did not know until this weekend’s stories in The Washington Post that this is exactly what is being talked about; that certain individuals over there in Mr. Feith’s shop or beneath him have been transmitting these secrets.

Now, the FBI have been asking questions. There are no conclusions. No one should assume guilt on anyone’s part. But if this has been going on, Tim, we are getting dangerously close to the T-word. And I would urge the president of the United States to get out in front of this, to take this investigation away from Mr. McNulty and give it to Patrick Fitzgerald and let them look into it because if the president can – I’m sure the president has no involvement in this. But questions have been raised, and this is not something on the Internet. This is The Washington Post doing this, moving all this around, and so I think there clearly needs to be an investigation.