On October 7th, President Donald Trump announced that U.S. troops would be leaving Syria. This announcement knocked Warhawks off their perches in our nation’s capital. General Jack Keane went on Fox News and called Trump pulling out of Syria a “strategic blunder” for the president. The next day after appearing on Fox News and criticizing Donald Trump. Jack Keane went to the Whitehouse to have a meeting with Trump about US troops leaving Syria.

Although reports came out that General Jack Keane’s meeting with Trump left an “impression” on the President, Trump did not change his mind on withdrawing troops from Syria. It wasn’t until a week later on October 14th, when General Jack Keane and Senator Lindsey Graham, convinced President Trump to stay in Syria. 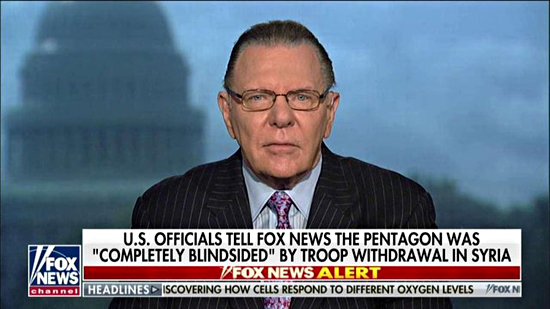 General Jack Keane showed President Trump during this second meeting maps of the oil fields in Syria. If this sounds familiar to you, that is because General Jack Keane also showed President Trump maps of the rare earth minerals in Afghanistan when Trump threatened to remove troops from Afghanistan earlier this year. President Trump came out of this second meeting with Graham and Keane with a different narrative about America’s role in Syria. It went from overthrowing Assad to defeating ISIS than to defending Israel, and now our troop’s mission is to protect oil fields in Syria?

General Jack Keane would instantly profit if the United States were to continue to occupy parts of Syria because he is involved in companies that are in the business of changing the energy infrastructure in the Middle East. Jack Keane is the chairman of AM General, which makes military vehicles for the United States government. Jack Keane is the chairman of the Institute For The Study Of War, and the co-founder of IP3 International, which is an energy consulting firm. In the past, General Keane has served as the Director of General Dynamics and was a strategic advisor to Academi, the military contractor convicted of war crimes in Iraq in 2007.

AM General is currently under a five year 2.2 billion dollar contract that they signed with the US military to build 11,500 High Mobility Multipurpose Wheeled Vehicles back in 2017. According to a report in the South Bend Tribune, AM General has 250,000 Humvees in more than 60 countries. Many will argue that the US military does not use the Humvee any more, but this does not address the fact that many other nations still do. Nor does it address the fact that the US Military signed a five-year contract worth 2.2 billion to build 11,500 Humvees for the US military two years ago.

In 2017 Jeff Adams, the spokesman for AM General, stated that the contract is “absolutely a clear signal of the global demand for these vehicles in the future.” It is unethical for any president to take advice for an active military operation from any person who will benefit financially from that military operation. General Jack Keane will not only profit from AM General but also the energy consulting firm he co-founded IP3 International.

The House Oversight Committee’s investigation into IP3 International and the Trump administration’s role in trying to transfer nuclear technology to Saudi Arabia is still ongoing.

“Since 2017, Rep. Elijah E. Cummings – who served as Ranking Member of the Committee – has been seeking information about the Trump Administration’s efforts to transfer US nuclear technology to Saudi Arabia, the actions of former National Security Advisor Michael Flynn in these efforts, and the role of IP3 International, a private company that assembled a consortium of US companies seeking to build nuclear plants in Saudi Arabia” 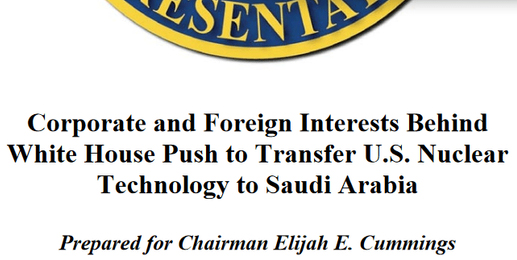 Even if we disregard the conflict of interest involving General Jack Keane, AM General, and President Trump’s decision to keep troops in Syria to “protect the oil.” There is a much bigger conflict of interest involving Jack Keane and IP3 International. Members of Trump’s administration including Jared Kushner, Micheal Flynn, and Senator Lindsey Graham were all promoting a new “Marshall Plan” for the Middle East as part of Jared Kashner’s “Deal Of The Century” to bring peace between Israel and Palestine.

IP3 International is currently under Congressional investigation for trying to sell nuclear technology to Saudi Arabia. As part of this probe, the Oversight Committee uncovered documents that indicate a violation of the Atomic Energy Act (Page 22).

“IP3 officials traveled to Saudi Arabia in December 2016 – after the election and before the inauguration – to solicit a $120 million investment from then-Saudi Deputy Crown Prince MBS in exchange for a 10% stake in IP3. The documents suggest that IP3 was soliciting these funds by highlighting its close ties to General Flynn and the support of the incoming Trump Administration for IP3’s plan to transfer US nuclear technology to Saudi Arabia. In direct communications with General Flynn, IP3 officials wrote that: “much of our confidence derives from how emphatically positive your message expressing your – and the President Elect’s – support for the Marshall Plan, was received by the leadership of KSA.” (Page 17-Staff Report: Corporate and Foreign Interests Behind White House Push to Transfer US Nuclear Technology to Saudi Arabia)