One of the most important skills a journalist needs is the skill of research. Proper research and investigation even into the most-simple of stories is vitally important, news should be accurate, verified and unbiased. However, when it comes to China, Western news is often very wrong. Sometimes erroneous but given the number of errors, this seems unlikely and certainly unprofessional. Sometimes we’re led to conclusions along a biased interpretative path by the journalist, the editor or the publishers’ prejudices. Sometimes it’s more pervasive, such as the PR campaign of the US Senate’s recent $300 million allocation to encourage journalists to find "negative articles related to China’s Belt and Road Initiative" (BRI) causing some journalists to focus on rewards instead of ethics.

A representative of the Financial Times, one of the world’s most respected newspapers provided an interesting example in a tweet a few days ago. FT’s Global China Editor, James Kynge, no doubt in his personal capacity, showed his true colors. His obvious belief that the Communist Party of China (CPC), never tells the truth, is exposed by the words "as ever…", indicating that he doesn’t believe anything China has previously officially reported. He then goes on to use an interpretation of part of a speech given by Xi Jinping where the words "头破血流" (Tóupòxiěliú) were used.

These words can be variously translated. Google translates them as "battered", the Chinese historical novel Journey to the West translated to English in 1983 by Anthony C Yu, for dramatic effect described, as: "blood gushing out and their heads split open". The official CPC translation described them as a collision course as in: "…anyone who would attempt to do so (bully China) will find themselves on a collision course with a great wall of steel."

Whatever the interpretation, when taken in context with the rest of the speech where President XI spoke of: "Peace, concord, and harmony…" then (China…) "does not carry aggressive or hegemonic traits in its genes", as well as "we will remain committed to promoting peace" it’s quite apparent that the meaning is not an "over-dramatised" interpretation of a threat but of peaceful progress into the future. While, at the same time, letting the world know that the country which was bullied in the past has come of age and will no longer be victimised. There’s nothing sinister or threatening in this, unless you’re the bully!

What is sinister is that we now know, from this reckless tweet, that the FT’s senior editor in China doesn’t believe a word the Chinese government reports, nor does he believe in China’s peaceful intentions. With this attitude and obvious bias at the top of the editorial team for FT’s Chinese news, can anything they report, or have reported regarding China, be relied upon?

Look at any Western media and see how China is subliminally portrayed negatively. The NY Times, most Australian media, Britain’s Guardian and some others in the UK, showing the CPC’s anniversary celebrations, almost all used the same photograph of Beijing showing an overcast and polluted sky, something not seen in Beijing for a long time.

The Global Times, on the contrary, showed what the weather was really like when it produced a shot of aerial displays depicting blue skies with clean white clouds. This is mainstream media preferring to create a perception of a vastly different China to reality.

China is an incredibly safe place, gun crime is nonexistent, burglaries, robberies, thefts and even murders are rare but a tragic event in Southern China’s Guangxi Zhuang Autonomous Region, where two people died and 16 others were injured by a knife attacker, showed a different method of media manipulation. Because of a permanent police presence at every Chinese school, this tragic event was minimized. The offender was arrested (not shot or killed). While Britain’s Daily Express, the BBC and the Independent all carried news of the event, none mentioned, despite it being widely reported in Chinese news, that the offender suffered from schizophrenia and felt bullied in that school as a child. The BBC referred back to a similar incident 2,000 kilometers away in 2018 as if two such incidents over a three-year period, in the world’s most populous country, constitute a crimewave. Britain’s Independent went one step further; they showed a photograph of police to support their report about this incident and, since most mainland police officers do not carry firearms, wanting to show a sinister side, they showed HK police instead.

One of Western media’s biggest and longest campaigns of anti-China propaganda, the "Xinjiang Narrative", occurs because the interpretation of the events, details and facts leading to the article are misunderstood.

A German man, who admits to be on a mission from his God, funded by the US State Department, reading Chinese documents and writing in English, believes China has constructed hundreds of prisons in Xinjiang Uyghur Autonomous Region (XJUAR). He is supported by a 23-year-old "Open-Source Intelligence Analyst" working for a militarily funded body set up by the Australian government. One has visited China as a tourist more than a decade ago, the other has told this writer personally that he is afraid to visit China. 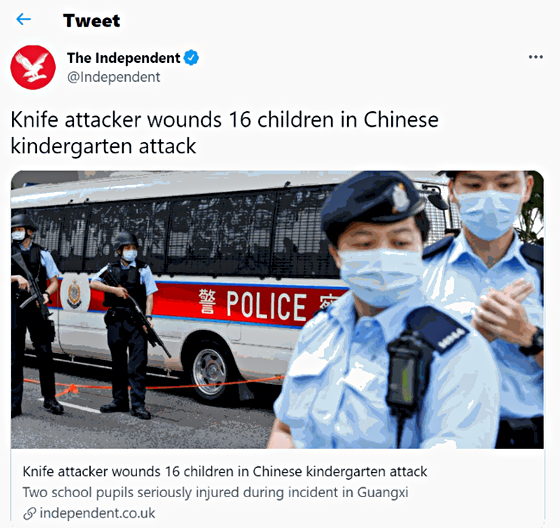 Millions of tons of concrete, thousands of kilometers of fencing and razor wire, troops, police and security personnel, security equipment, CCTV cameras have been shipped and installed in the region. There are thousands of buildings inside hundreds of compounds. High fences surround living accommodation for tens of thousands of people in small rooms it’s not surprising that an interpretation of a huge prison system is reached.

The reality is quite different. Misinterpretations occur because of a lack of local knowledge. Unlike this writer, almost none of the journalists reporting on XJUAR, none of the politicians, none of those countries’ diplomats, and very few academics have ever visited Xinjiang. If they had, they would know that every school, factory, college and university in China has a wall around it, these walls, for obvious reasons, are bigger and better fortified in XJUAR.

Throughout China, every one of these facilities has manned gates, often painted in police colors because the police in China train, and offer, security personnel as a business stream. Also, throughout China, every one of these institutions has dormitories, people travel great distances in order to work or study in these facilities. Factories, schools and universities provide food in canteens and uniforms for staff to wear and, if we take satellite photos at the right time, we’ll see them, wearing uniforms and walking between the different parts of the campus – a minimal local/cultural knowledge tells us this is perfectly normal.

XJUAR is a secure zone, there is no doubt. It was the scene of multiple terrorist activities (many of them proven to be organized and financially supported by outside forces). So, XJUAR is the destination of military and police personnel. It also shares a border with Afghanistan where the US military have been training and/or fighting terrorism for more than 40 years.

The Chinese government has decided, instead of fighting terrorism with bombs and bullets, to win hearts and minds by bringing jobs, income, training and other opportunities to the region. In doing so, they have undoubtedly also built a few prisons, but certainly no more than any other country in the world and definitely less than the homes of their main accusers; the US State Department and Australia’s Australian Strategic Policy Institute (ASPI).

Taking this path obviously upset some people, namely the separatists, terrorists and extremists who want to destabilize the region. These "ists" provide a much-needed boost to any organization with an axe to grind on China. Currently there is one country which carries such an axe, a country which admits to funding Uyghur separatists, the same country which admits to bombing those terrorists when they were fighting against them in both Afghanistan and then Syria. The same country that declared them a terrorist organization and then, in an apparent act of spite against China, on the final day of the Trump administration, delisted them from the list of terrorist entities: the USA.

The US has a history of offering immunity, false identities, witness protection and even large sums of cash to encourage witnesses to give evidence. However, in a real court, those witnesses are sworn under oath, if they are caught lying, they receive penalties including imprisonment, they are cross examined and their evidence is corroborated by forensic or physical evidence. None of the narrative’s witnesses appear to have sworn to tell the truth or signed affidavits, none have been effectively cross examined and all legally left China with their passports. There are no Consulates in XJUAR, so visas are issued in other parts of China, meaning they were free to travel to Embassies or Consulates in other provinces. There is no physical evidence to support them, no one has seen photographs of the "camps" the witnesses carry no scars or medical conditions that can be attributed to the abuses they allege. And, an important point: not a word of support from any of the hundreds of thousands of people who would be required to organize, staff, and administer a network of complexes such as is alleged. Surely, even in China, such a workforce would be hard to hide and must include many people who disagree with the alleged program – whistleblowers seem to be conspicuous by their absence. There’s no flood of refugees in bordering countries, something which is observable in every other genocide reported around the world and, one final point; many of these witnesses who receive financial support in their host countries, now eagerly await legal status in those countries. In short, they are incentivized. While they shouldn’t be disregarded, their testimonies need to be critically examined.

XJUAR is an open region, anyone can go there. Journalists claim that they can’t, but that’s another misrepresentation, they can, tourists enter the region and travel both independently and freely, this writer has done so several times. Verification of facts is easy to obtain but not wanted. Difficulties such as the remoteness of the region, language barriers, so-called lack of access and government scrutiny are easily overcome.

When we look closely at this recent spate of negative news on China, and, let’s be frank, a few years ago, China was everybody’s friend, including Joe Biden’s when he visited in 2011, famously praising and welcoming China’s growth, what we see are well-proven editorial biases, some errors and some deliberate lies, a lot of misinformation which is paid for from US Senate budget allocations, and many subliminal references designed to influence the reader’s conclusions. Once we realize this, it’s clear to see that readers who are not critical or knowledgeable of the realities on the ground are being misled. 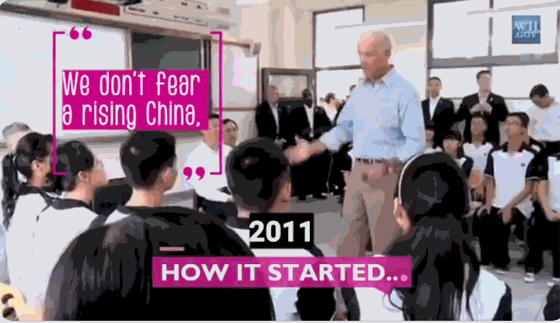 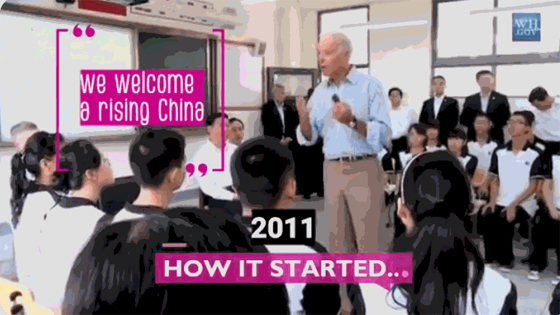 Jerry Grey is a seasoned traveller in China having traversed the country several time by bicycle, he has chosen to live in Guangdong since his retirement from full time work but has visited and spent time in almost every province. He write regularly of his travels and is often published in Chinese mainstream news.