Sometimes the truth comes from the strangest places. While arguments for and against the war rage on TV and radio talk shows, in chat rooms and editorial pages, at last someone breaks through all the noise to say: “I ask our youngest citizens to believe the evidence of your eyes” (sic). That person is President George W. Bush.

Rather than debate endlessly and spout off opinions, we should remember that Mr. Bush is particularly concerned about the dark-skinned people in the dark parts of the world: “By our efforts, we have lit a fire as well, a fire in the minds of men. It warms those who feel its power, it burns those who fight its progress, and one day this untamed fire of freedom will reach the darkest corners of our world.” Indeed, it already has: 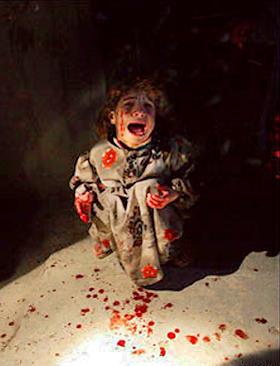 This tiny girl, splattered with her parents’ blood when they were murdered while driving home, was not the only dark-skinned tot to suffer the untamed fire of freedom. This “unfortunate incident” orphaned six children in one untamed burst of automatic gunfire.

Spraying families with bullets has become commonplace for news-numbed Bushians, a rather ho-hum “well that’s the price of democracy,” “freedom isn’t free, you know,” “those people don’t value human life like we do” event. What’s remarkable about this particular murder is that it was captured, frame-by-frame, bloody moment by bloody moment, and posted on BBC.com as the inaugural balls were in progress a world away.

If you didn’t know better, you’d think you were watching a scene from Schindler’s List.

This story in pictures came right out and named the bad guys who murdered the little ones’ mum and dad – U.S. soldiers. Following orders, I’m sure. Confused and frightened themselves, quite likely. But U.S. soldiers nonetheless. Like it or not – and I don’t, for many reasons – that will be what millions of people around the world take away from this incident.

Our Youngest Citizens Have Eyes to See

As Bush advises, our youngest citizens should believe what they see. This advice isn’t necessary, of course. Children, unless they’ve been raised in neglectful or harshly “disciplinarian” homes, are quite empathetic to human and animal suffering. Those whose parents really listen to them and care about their feelings tend to develop a keen ability to identify with other people – and others’ feelings – later in life.

When our youngest citizens see evidence of harm – a bloodied body, for example, or a tear-stained face – they don’t discount it with adult explanations that these things “are the price of liberty” or “will be worth it when we bring democracy” to this or that country.

Young people may pretend to be persuaded to avoid criticism, but they aren’t as easily fooled as adults who’ve learned to be conservative with their compassion.

For the few hours that it was on the front page of BBC News online, the story must have caught the attention of many young citizens; it was posted on the eve of the inauguration, in the early evening when American kids are home from school but not yet in bed.

Of course, relatively few kids are sufficiently interested in current events to read Internet news. But some precocious teens – even in Bushian homes – are news junkies.

And speaking of young people, how many youngsters in the rest of the world saw this eyewitness-news story? How did the image of those screaming kids – with whom young people everywhere can identify, since they were only recently little themselves – affect children in the UK, in Europe, in Asia, in Africa, in Australia, in Egypt … in Iraq?

What will they remember of Mr. Bush’s War of Terror? What images and feelings will flood them, for years to come, whenever they hear the words “American,” “Christian,” “soldier” … even “democracy,” “liberty,” or “freedom”?

Like the most terrifying horror film imaginable, the images take you there. When you see the first frame, you find yourself imagining how it must have felt to be in that car, maybe dozing on your sister’s shoulder, when all the confusion started.

My daughter noticed that the brakes were on in the first photo – had the father tried to stop, panicking and not sure what he was supposed to do?

You’re in the back seat with your brothers and sisters when you hear your parents cry out, perhaps one saying, “Do they want us to stop or go faster?” and the other saying “I don’t know, but look they have guns! The children! They’re going to shoot!”

You hear deafening bangs, loud and rapid. Your little mind is muddled, everything is a blur, and all you hear are screams. You notice that you’re screaming, too. You feel something wet on your skin, wet and warm. What? Rain? Inside the car? No, can’t be…

You call for Mommy. She won’t answer you. What’s wrong with Mommy? She never ignores you when you cry. Your eyes are clamped shut now, or maybe you just can’t see. Your brother is yelling for your father, but no answer. The screaming is hurting your ears.

The front seat looks empty. Where are Mommy and Daddy? Did they fall down?

Your hear yourself screaming, but you can’t think. Even your big sister is crying, and she’s the brave one! You see lights headed your way. Your heart is pounding out of your chest. The bad men are coming toward the car! Where are Mommy and Daddy? Why won’t they help you?

You feel sticky. What is it? What is it? The car door is open and you can see more clearly. Your tiny heart stops for a moment because you think you know what the red stuff on your hands and clothes and face is – it’s part of Mommy and Daddy!

The dull thud of reality hits you like a brick in the face. Mommy and Daddy aren’t helping you because that red sticky stuff all over you is blood – their blood. And that means your parents are dead. Dead. Dead. Not coming back – No, can’t be, can’t be…

The bad men are coming to get you! You scream and try to escape. They talk strange words, they have lights on their heads and guns on their bodies – they’re taking you! 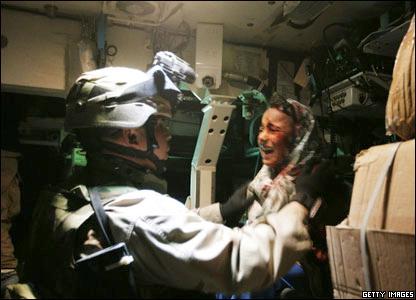 You scream and scream as the men surround you, blinding you with the lights on their heads. You can’t understand what they’re saying, but you recognize them: They’re the men called “American Christians” … the ones who kill people!

Panic overwhelms you and you shake uncontrollably. Your hands are sticky…

Maybe if you keep screaming loud enough and long enough you’ll wake up, like when you have a bad dream, and you’ll be back in your own bed and realize you’ve just been having “a silly scary dream,” as Mommy calls them. And she’ll look down at you and kiss you, and everything will be all right. 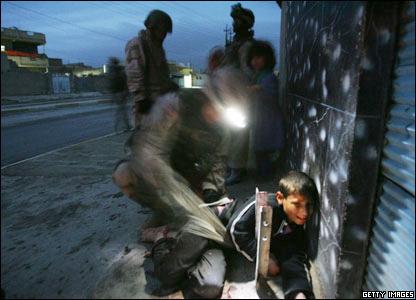 So you squeeze your eyes shut and scream louder. Longer. Wake up now. It’s just a silly scary dream.

You open your eyes to see the evidence before you. No! It’s still here, it’s real! Now you can see that Mommy and Daddy are lying down! They do look dead … can it be true? Daddy was talking to Mommy just a minute ago!