Overblown: How Politicians and the Terrorism Industry Inflate National Security Threats, and Why We Believe Them
John Mueller
Free Press, 2006
259 pp.

Sept. 11 changed everything, it is said, and nowhere has its effect been more significant than on U.S. foreign policy. In 2000, George W. Bush campaigned on behalf of a “humble” foreign policy. After the terrorist strikes, his administration gave new meaning to the concept of arrogance. 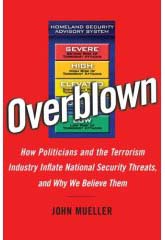 At first, Washington built international support for a concerted campaign against al-Qaeda and the Taliban regime in Kabul. But the administration quickly downgraded its efforts against terrorism, prematurely withdrew forces from Afghanistan, and launched an unnecessary war of choice against Iraq. The latter soon descended into bloody chaos, spawning a host of new terrorists. Today Afghanistan risks following Iraq’s trajectory, while Washington’s international reputation has tanked. Popular support for administration policy has plummeted.

Rather than acknowledge error, the administration ever more insistently – but ever less persuasively – justifies America’s continued occupation of Iraq as necessary to prevent terrorist attacks in the U.S. The administration simply ignores abundant evidence to the contrary.

The disaster in Iraq gives further credence to John Mueller’s argument in Overblown. His thesis is compelling, though counterintuitive. Despite the obvious horror of 9/11 and subsequent terrorist attacks in Bali, Madrid, London, and elsewhere, terrorism claims relatively few lives. Mueller, who teaches at Ohio State University, explains that people have a lifetime chance of dying from a terrorist attack of one in 80,000, “about the same likelihood that one would die over the same interval from the impact on the earth of an especially ill-directed asteroid or comet.”

Thus, Mueller contends, it is important to adopt a measured response. Unfortunately, Mueller explains, “our reaction against terrorism has caused more harm than the threat warrants – not just to civil liberties, not just to the economy, but even to human lives.”

Overblown provides a wealth of fascinating arguments and supporting data. Although one can easily quibble over one or another of Mueller’s provocative assertions, he almost certainly is correct that the U.S. government’s response to 9/11 has made us worse off and less safe.

One of Mueller’s most important contributions is his review of what he calls “the terrorism industry,” made up of politicians, bureaucrats, and journalists. Because the industry encourages scaremongering and wasteful spending, Mueller argues that “the harm of terrorism mostly arises from the fear and from the often hasty, ill-considered, and overwrought reaction (or overreaction) it characteristically, and often calculatedly, inspires in its victims.”

Critical to this contention is Mueller’s assessment of the potential harm caused by terrorist attacks. He writes, “For all the attention it evokes, terrorism, in reasonable context, actually causes rather little damage.” Other than in 2001, very few Americans have died in terrorist attacks. But what of the “lurid worst-case scenarios” involving weapons of mass destruction, he asks?

There is good news. Nuclear weapons are the most fearsome, but also very hard to construct. It remains worthwhile to make nuclear transfers more difficult, but, argues Mueller, “the difficulties for the terrorists persist, and their likelihood of acquiring the weapon any time soon remains very low.” Chemical weapons are more available, but much less destructive. He similarly analyzes the potential of biological and radiological weapons.

These arguments are not new, though Mueller makes them well. However, he enriches Overblown with a wide-ranging historical analysis. For instance, he reviews prior crises in which, he argues, the threat to America also was exaggerated. His book offers rich fodder for a serious debate over how U.S. officials perceive threats and present them to the American people.

For instance, Mueller proposes an alternative policy of “containment and harassment” against Japan after Pearl Harbor, arguing that “the United States might well have been able productively to exacerbate Japan’s dilemma of overexpansion, helping to impel it to retreat from its empire. Moreover, this might have been accomplished with far less misery and bloodshed by using containment rather than war.”

Mueller also critiques the containment of communism. Here, too, he suggests an alternative approach, contending that “throughout the Cold War, the United States and sometimes its allies persistently, often vastly, and sometimes willfully exaggerated either the capability of international communism to inflict damage in carrying out its threatening revolutionary goals, or its willingness to accept risk to do so, or both.” He picks apart U.S. policy in many areas – responses to the Soviet-engineered coup in Czechoslovakia, the Sputnik launch, the Cuban revolution, the threat of domestic subversion, and more.

Particularly illuminating is Mueller’s compendium of “devils du jour,” characters who scared Americans, though but “poor players who strutted and fretted their hour upon the world stage and then were heard no more." Mueller’s rogues gallery includes Gamal Abdel Nasser, Sukarno, Muammar Gadhafi, and the Ayatollah Khomeini. Mueller applies this approach to past fears of an economically dominant Japan and of various petty dictators today. These examples may spark violent disagreements, but overall Mueller seems right to assert that “when big problems go away, smaller ones become magnified in importance to compensate” and “when unfamiliar problems come to arrest the public and political consciousness, there is a demand for easily graspable, if often simplistic and spooky, explanations.” Unfortunately, U.S. leaders “can become absurdly preoccupied” by minor challenges and neglect better policy alternatives, Mueller contends.

He brings the issue back to terrorism in suggesting an alternative, more restrained response. He contends that most threats die out; moreover, it is impossible to prevent all attacks in an open society such as our own. Mueller deftly critiques current anti-terrorism efforts, such as the Transportation Safety Administration’s handling of airline safety.

However, the damage caused by TSA blunders cannot compare to the harm resulting from the invasion of Iraq. He worries “that the heedless (even reckless), internationally opposed, and unnecessary war in Iraq will prove to be counterproductive – perhaps even disastrously so – in the campaign against international terrorism and particularly against al-Qaeda.”

What would Mueller do to combat terrorism?

"[T]he policy I propose stresses three issues. First, the country can readily absorb just about anything the terrorists can dish out, and policy should mostly focus on some limited preventive and protective measures, particularly those that might make the development of nuclear weapons more difficult, and on policing endeavors, particularly ones coordinated with governments overseas, where such measures have shown some success. Second, to minimize the damage terrorism can do, there should be efforts to reduce or limit the erratic and foolish fears it characteristically inspires, insofar as this is possible. And third, policymakers should seek to control their political instincts to overreact when provoked by acts of terrorism – something that, contrary to conventional thought, may be, however unnatural, entirely possible politically."

Overblown provides a powerful antidote to the foolish scaremongering that dominates today’s debate over terrorism. Mueller’s arguments should stimulate and challenge even those people he does not convince.

American policymakers, especially those desiring to become the next president, are most in need of such a challenge. However much one might disagree with Mueller over his provocative historical analysis or question his anti-terrorist proposal, his critique of the current anti-terrorist paradigm is devastating. America can ill afford to continue policies that have been not just ineffective, but counterproductive.