The wreck of the Bush crusade to democratize Iraq – let alone the Mideast, let alone the world! – has effectively discredited what had been a growing demand for humanitarian intervention around the globe. The appeal of waging war to save lives is obvious. In practice, however, conflicts begun for allegedly humanitarian reasons rarely have humanitarian outcomes. Indeed, such interventions, as illustrated by the bloody debacle in Iraq, ultimately can generate as much evil as that which originally was used to justify outside action. 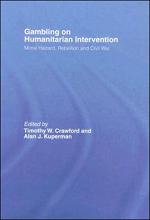 This is a good enough reason to say never again. If an exception comes along, an unlikely case in which the U.S. really can easily and costlessly intervene, save multitudes of lives, and leave expeditiously, without having to stick around to fix a devastated society or rebuild a mangled state, then Americans can tread cautiously and treat it as the exception that it truly is.

However, there’s another potential problem with humanitarian intervention that advocates of warmongering for good rarely acknowledge: threatening to intervene to settle bitter internal conflicts creates an incentive for weaker parties to foment such conflicts. For many rebellious groups, outside intervention is the only hope for success; thus, triggering involvement by a neighboring nation, regional power, or the globe’s superpower becomes an overriding objective. In economic-speak this is the problem of “moral hazard.”

It’s a highly plausible thesis backed by anecdotal evidence. When I visited Kosovo in the summer of 1998, for instance, local ethnic Albanians were openly pressing for American and European action. Alush Gashi, then active in the resistance against Serb rule, told me that the prospect of outside intervention “depends on how we look on CNN. People need to see victims in their living rooms.”

Perhaps the Kosovo Liberation Army (KLA) would have flourished even if there had been no hope of foreign involvement. However, it seemed clear that the ethnic Albanians, like the Bosnians before them, adjusted their tactics to enhance the prospect of winning outside support.

Attempting to provide a more academic assessment of the “moral hazard” thesis is Timothy Crawford’s and Alan Kuperman’s Gambling on Humanitarian Intervention.

"The common wisdom underlying this emerging norm is that humanitarian military intervention reduces the amount of genocide and ethnic cleansing (forced migration), which together can be labelled ‘genocidal violence’. However, this causal relationship has not been demonstrated, and there is some contrary empirical evidence and deductive logic suggesting that the intervention norm may at times actually cause genocidal violence. This is because the norm, intended as a type of insurance policy against genocidal violence, exhibits the pathology of all insurance systems by creating moral hazard that encourages risk-taking … . Specifically it encourages disgruntled sub-state groups to rebel because they expect intervention to protect them from genocidal retaliation by the state. Actual intervention, however, is often too late or feeble to prevent such retaliation. Thus, the norm causes some genocidal violence that otherwise would not occur."

As one would expect, given the complexities of human nature and behavior, the application of the moral hazard principle to ethnic and religious conflict is highly complicated. Timothy Crawford, of Boston College, points to the variety of potential impacts, such as chronic (a background factor for rebellions sparked by more immediate causes) and contagious (the cause of new conflicts, particularly in the same region). Intervening parties also may or may not anticipate the consequences of acting.

The contention that military intervention creates a moral hazard, actually fomenting more conflict, is difficult to prove in practice. Nevertheless, Kuperman, a professor at the University of Texas (Austin), points to the Balkans, where there is evidence that in both Bosnia and Kosovo the prospect of “humanitarian” military assistance actually worsened the initial violence.

Obviously the break-up of Yugoslavia was a complicated affair. However, Kuperman concludes: “subordinate group officials came to favor rebellion because they expected that by provoking state retaliation they could attract humanitarian military intervention sufficient to achieve their goal of independence.”

He makes a persuasive case that officials were aware of the risks of secession and waited to initiate violent resistance until they had a reasonable hope of winning outside aid. Restive ethnic and religious minorities in Yugoslavia saw American intervention against Iraq to liberate Kuwait and protect the Kurds, and then American and European intervention in Bosnia to protect (largely) Muslims, as precedents for allied intervention in Bosnia and Kosovo, respectively.

Another contributor to the volume, Arman Grigorian of Wesleyan College, agrees that moral hazard plays a role, but contends that similar incentives should affect the behavior of a state that considers applying “eliminationist violence” against rebels. He confronts the case of Kosovo: “while moral hazard may have been a problem in Kosovo, it was not the problem. US policy did contribute to the KLA’s belligerence and radicalism, but the explanation of the final outcome cannot be reduced to this fact alone. If the USA could take measures to mitigate the problem, but failed to do so, we need to ask why? Moreover, we need to explain why the USA failed to predict Milosevic’s reaction to the intervention in March 1999, which was the direct cause of the catastrophic escalation that followed.”

More critical is Jon Western of Mount Holyoke College. He notes that “the logic of unintended consequences and perverse incentives is not new to international relations theory.” Other examples include the problem of free-riding on collective security agreements (as evidenced by America’s military relationships with Europe, Japan, and South Korea alike).

However, though Western acknowledges the “intuitive and deductive logic” of the moral hazard argument, he dismisses the empirical case: “At best, we have a single case – Kosovo – which exhibits some evidence of the rebel group engaging in provocative action in hopes of luring international intervention on its behalf.” Moreover, he cites the reduction in the number of internal conflicts in recent years as evidence of the positive impact of the “emerging norms” of humanitarian intervention.

R. Harrison Wagner, from the University of Texas (Austin) concludes the volume with a more conceptual look. Today, he suggests, “inconsistent expectations about how potential outside interveners might respond to such conflicts can make it impossible for conflicting groups within a state’s territory to settle their conflicts peacefully.” For this reason, “the more credible and specific a norm of humanitarian intervention became, the less likely would be inconsistent expectations about whether it would occur and what its consequences would be.”

But ugly reality has intruded, he notes:

"The end of the Cold War seemed to end the prospect of military conflict among the major states, and left the members of NATO with a very large military force that had no clear immediate use. Thus some people began to think that humanitarian intervention might be both easy and non-controversial. Such optimism is harder to sustain in light of both the recent war in Iraq and the lingering problems from earlier interventions in the Balkans. Thus the norm of non-intervention might be given new life for reasons that have little to do with the possibility that its abandonment could be a stimulus to intrastate violence."

Does humanitarian intervention create a problem of moral hazard? The causes of most conflicts are deep-seated and complex; rebellions often are sparked by emotions and incidents which no leader can control. Thus, it is hard to blame any conflict, even Kosovo, solely on the incentives created by the prospect of outside involvement. However, the latter almost certainly has affected the tactics adopted by resistance movements, particularly their willingness to risk – and perhaps hope for – bloody state retaliation.

There are many good reasons for the U.S. to eschew war, even conflicts allegedly inaugurated for the best and most moral of reasons. The fact that Washington is easily manipulated by local actors adds a practical argument to what already should be a moral imperative. The possibility that humanitarian intervention increases conflict and worsens war is another persuasive reason to replace imperial meddling with cautious non-intervention as America’s foreign policy lodestar.