Winning the Un-War: A New Strategy for the War on Terrorism
Charles Peña
Potomac Books
272 pp.

If critics of the Bush administration are setting themselves up for a stay at Gitmo, then Charles Peña will end up spending a long time in a particularly small cell. A senior fellow with the Coalition for a Realistic Foreign Policy, he has been one of the most consistent and trenchant critics of both the mismanaged war on terrorism and the misguided invasion of Iraq. He explores the relationship between the two in Winning the Un-War, a vitally important book for anyone who believes that safeguarding America requires more than ritualistic incantations about freedom’s inevitable triumph. 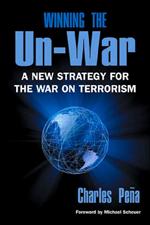 Reading Winning the Un-War leaves one wondering what might have been. The Clinton years were dismal, with a counterproductive war in the Balkans, ineffectual retaliation for terrorist attacks (blowing up an inoffensive pharmaceutical plant in Sudan, for instance), and endless sanctimonious lectures for the rest of the world. Candidate Bush advocated American “humility” abroad and proposed turning the Balkans over to the Europeans; his father had recognized the tragedy resulting from Israeli subjugation of millions of Palestinians. Moreover, “the adults” were supposedly coming back to Washington to run foreign policy.

Instead, the administration managed to combine arrogance with incompetence and make the world much more dangerous for America. Peña tells this story with skill and thoroughness.

The Global War on Terrorism (GWOT) will define the Bush presidency. Yet for all of the smoke and mirrors employed by administration officials, after more than four years, notes Peña, “the United States still lacks a clear focus for waging the war on terrorism.” Even though hardly a day goes by without an administration photo-op dedicated to demonstrating its resolve, “There is no widescreen, big picture view of the terrorist threat and no top-to-bottom plan to combat it,” he writes.

As a result, Washington is doing a bad job of combating terrorism against the U.S. Ineffectiveness would be one thing. But Peña asks an even more devastating question: “are we unwittingly creating new enemies as a consequence” of the GWOT? His answer, alas, is yes, most obviously as a result of the foolish decision to invade and occupy Iraq.

Peña methodically develops the case against current policy. His first point is simple, if devastating: President Bush was no more focused on al-Qaeda than his predecessor before 9/11. Bush talked about missile defense and rogue states, but emitted not one word about the real threat facing America.

Of course, notes Peña, “This is not to say that 9/11 was President Bush’s fault, but simply to point out that if the al-Qaeda threat was as obvious as the president claims, it is curious that he did not talk about it when discussing U.S. national security prior to the 9/11 attacks.” Curious indeed.

Reinforcing Peña’s first point is the administration’s response to 9/11. It quickly forgot that it was al-Qaeda that had organized the attack on America. Notes Peña: “except for U.S. military action against al Qaeda and the Taliban in Afghanistan, U.S. actions and attention have been almost singularly focused on Iraq, which is representative of the administration’s pre-9/11 threat and national security paradigm – rogue states and WMD.”

After 9/11, the administration almost immediately looked to Iraq. The day after the attacks, Defense Secretary Donald Rumsfeld suggested defenestrating Saddam Hussein. The much-hyped “Axis of Evil” went even further afield, raising talk of war with North Korea, in particular. Peña blames this shift in focus for reducing the amount of resources devoted to combating al-Qaeda. More important, he notes, “America cannot afford to take actions that actually contribute to making the threat worse by increasing anti-American sentiment in the Muslim world, which is the basis for al-Qaeda to gain sympathy and support and for Muslims to become terrorists.”

The most obvious and dangerous distraction from fighting terrorism was – and remains – the war in Iraq. After years of deception, bungling, wishful thinking, mistakes, and failure, the issue should require little discussion. Yet the administration stubbornly soldiers on, proclaiming a new turning point about as often as a car bomb explodes in Baghdad. Freedom is ever marching, but never seems to reach the goal. Peña expertly dissects the administration’s case for war and diagnoses the counterproductive impact of the conflict on American security.

The most serious charge was that Iraq possessed WMD. It did not, of course, and, observes Peña: “even if Iraq possessed chemical or biological weapons (which was a fair assumption) or even a nuclear weapon (which was a stretch of the imagination), it did not have the long-range military capability to strike the United States and thus pose a direct threat.” As for Baghdad’s alleged ties to al-Qaeda, that argument, too, ended up kaput: “at most both shared a common hatred of the United States,” he writes.

The “kitchen sink” arguments were no more persuasive. There was spreading democracy, which Deputy Defense Secretary Paul Wolfowitz frankly admitted didn’t warrant going to war. And there was Iraq’s violation of UN resolutions. However, notes Peña, “Even if Iraq was in violation of UN resolutions, the U.S. military exists to defend the United States: its territorial integrity and national sovereignty, its population, and the liberties that underlie the American way of life.”

Tragically, the war has made these goals more difficult to achieve. As Peña points out, the administration’s standard litany regarding Iraq is false in all respects: we are not more secure, Iraq is the “central front” in the war on terrorism only because the administration invaded that nation, and killing Iraqi insurgents generates more terrorists who are more likely to eventually strike in America.

Even setting aside the Iraq misadventure, Peña points out that “in the aftermath of 9/11, U.S. national security policy has become more sprawling rather than focused on protecting the American homeland and public against the threat of terrorism.” This is the singular danger the American republic faces, so a responsible administration would “clear the decks,” so to speak. Instead, Washington fusses at Russia’s commitment to democracy, suggests that China poses a threat, advocates the spread of democracy, and seeks to, in its own words, “make the world not just safer but better.”

The latter is a wonderful platitude but gibberish as foreign policy. Again, the administration is dissipating America’s power while creating enemies. Nor is it doing so ignorantly. Writes Peña, “even the administration admits that our aggressive foreign presence abroad spurs terrorism. Yet maintaining a global presence appears to have become an end in itself for U.S. national security strategy.”

Diagnosing what we are doing wrong isn’t the hard part. The administration’s failures are disastrous and manifold – only Democratic politicians seem helpless to come up with a realistic alternative. The first step is to get out of Iraq and abandon unnecessary commitments and military deployments around the world. Terrorism is the most serious security threat facing the U.S. today; Washington should treat it as such.

Step two is to recognize that deterring terrorism is not primarily a matter of conventional war waged by conventional forces: “al-Qaeda is not an enemy in command of an opposing military force, and as a transnational, non-state terrorist organization, it does not have physical infrastructure and high-value targets that can be easily identified and destroyed by military force,” he writes.

Indeed, Peña’s chapter on America’s outsized military budget demonstrates why U.S. foreign policy was outmoded even before 9/11. Today, Washington spends as much as the rest of the world, yet whines when a potential competitor such as China dares augment its armed forces. This is expensive foolishness, expensive foolishness made dangerous by the rise of al-Qaeda and other terrorist groups that mean Americans ill.

Step three in dealing with terrorism is to understand those who seek to kill us. Part of Peña’s discussion is organizational, noting “that al-Qaeda can rapidly adapt to changing circumstances and regenerate its leadership to respond to those changes.” Fighting such an organization obviously is no easy task.

Even more important is Peña’s review of al-Qaeda’s philosophy. He writes that it “is more than just a terrorist organization: it is representative of a radical Islamic ideology.” In this area, Peña provides the inestimable service of explaining to the American people that terrorists do not kill us because they believe we are wonderful. They kill us because they believe we are killing them. Particularly important is U.S. support for what are seen as “apostate Islamic regimes,” such as Saudi Arabia, and backing for Israel’s military rule in the occupied territories.

Although the Bush administration has gloried in its unilateralism, allies are a critical component of any fight against terrorism. Arab states are important players, though Peña warns: “The key to success in Saudi Arabia and other countries, such as Jordan, Egypt, Bahrain, United Arab Emirates, the Philippines, and Indonesia will be to ensure that the al-Qaeda threat in those countries is not used as an excuse to crack down on what should be legitimate government opposition.” Aid from Europe and more distant Muslim nations, such as Indonesia, also is required.

However, it’s not enough to try to destroy terrorist organizations. Capturing and killing terrorists before they kill us is necessary but not sufficient. The U.S. also has got to stop appearing to make war on Islam if it wants to reduce the desire of terrorists to strike at America.

In Peña’s view, that means moderating America’s one-sided support for Israel as well as ending “cozy relationships” with authoritarian regimes in the Arab world. How to ensure the cooperation of Pakistan, Saudi Arabia, and other states without appearing to be in their pocket won’t be easy, but is a key component to reducing terrorist threats. He writes: “Ultimately, without blaming America, we must be willing to look in the mirror to examine and understand how our own policies – both foreign and domestic – may affect the dynamics and evolution of the Muslim terrorist threat.”

Finally, Peña analyzes what really should be the job of the Defense Department: defending America’s homeland. Since the Pentagon today mostly threatens and wages war to achieve ends largely irrelevant to protecting America, Congress created a new Cabinet agency: the Department of Homeland Security. It has valuable work to do – Peña points to threats of anti-aircraft missiles and WMD smuggled into ports. Unfortunately, the department has performed poorly at best. Notes Peña: “On 9/11 we were unlucky. Thankfully, we have been lucky since. But eventually our luck will run out because no matter how much we spend on homeland security, how many defensive measures we implement, and how carefully we protect civil liberties, in the final analysis we cannot build a perfect defense against every potential terrorist attack.”

Which brings Peña back to his book’s most important message: America’s interventionist foreign policy generates terrorism. People attack us because they perceive us to be bad, not good. Concludes Peña:

“[A] determined terrorist will eventually find ways to circumvent the defense. And it is unrealistic to believe that we can kill each and every al-Qaeda terrorist. These two realities only accentuate the imperative to change U.S. foreign policy. If the United States does not change its policies to stem the growing tide of anti-American sentiment overseas – particularly within the Islamic world – all the time, effort, and money spent on other aspects of homeland security will be wasted because the pool of terrorist recruits will grow and the United States will continue to be a target. No matter how successful the United States is in homeland security and dismantling al-Qaeda, it will not stop terrorism unless its foreign policy changes. More than anything else, U.S. foreign policy is the cause of the virulent anti-Americanism that is the basis for terrorism. Changing U.S. foreign policy may not guarantee victory in the war on terrorism, but not changing it will certainly spell defeat.”

The American people rarely hear this sort of unvarnished truth. Winning the Un-War is the most important book yet on the threat of terrorism and how to beat it.