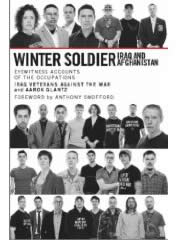 The following is an excerpt from Winter Soldier Iraq and Afghanistan: Eyewitness Accounts of the Occupations by Iraq Veterans Against the War and Aaron Glantz. From March 13-16, hundreds of Iraq and Afghanistan war veterans gathered in Silver Spring, Md., to testify about atrocities they had personally committed or witnessed while deployed. Among those who testified was former National Guardsman Christopher Arendt. He served a tour at Guantanamo Bay, Cuba.

I would like to share with you how one goes about becoming a concentration camp guard without ever having really made many decisions. I was 17 years old when I joined the Army National Guard in Michigan. I was living with friends. I decided to join the military Nov. 20, 2001, because I had no other options. My family was poor, I was poor, and I wanted to go to school. I was promised a significant amount of money for this purpose, which I have yet to receive. I was in the field artillery, Charlie 1st of the 119th Field Artillery, where I served, quite happily, for… no. That’s a lie. I was miserable; I hated it, but I served nonetheless.

We got orders in October 2003 that we would be deploying to Guantánamo Bay, Cuba. Artillerymen would be deploying to Guantánamo Bay, Cuba, to be prison guards. During our one-month mobilization process, we were taught how to put shackles on other people. It feels ridiculous when you are practicing how to put shackles on another human being. You realize how absurd it is. You’re putting them on somebody’s hands, and it’s awkward. It hurts, it’s uncomfortable, and it feels dehumanizing. This is just practice. This is just to warm-up for the big game.

We left for Guantánamo Bay early in January 2004. It was hot. It was uncomfortable.

We slept in awful little houses, but at least we had houses. I served on the blocks for two months as a prison guard. My duties were to feed detainees and dispense toilet paper. I occupied myself in some way, shape, or form to drive the boredom out. The primary difficulty in keeping my humanity intact was the boredom. One of the ways I dealt with this was by talking with the detainees. A consequence of having detainees is that they are human beings and also have stories. I talked with them about those stories, which led to my being taken off the blocks. I was sent to work in the Detention Operations Center as the escort control for the last eight months of my tour. I managed the movements of every detainee in Camp Delta. I did this on 12-to-14-hour shifts and rotated with a very small crew of other specialists. I was 19 at the time.

Papers, numbers, shackles, and keys. All of that had to be accounted for, but it wasn’t anything more than papers, numbers, shackles, and keys. I’d call two people in, usually outranking me, and I’d have to tell them to do something that they hated doing. And they hated me for telling them to do it. That’s the nature of the machine. We’re just chips in a Plinko machine.

Orders come down from God knows who or where. They just keep coming down.

There are two specific things I will address about the operation at Guantánamo Bay,Cuba. One is the issue of torture. I’ve heard a lot of speculation as to what torture is. I would like to ask everyone to consider whether living in a cell for five years, away from your family and friends, without ever being given answers as to why you’re there, whether this is torture. Having to ask 19-year-old boys who don’t have any idea about the policies of their government why they are detained and the answers that we weren’t able to give – I consider that torture. But if that wasn’t enough, we had other methods to make certain we got around to torturing these people.

I dispatched the detainee movements. I would come into the office at 4:30 in the morning and there would sometimes be a little paper in the wall with a number on it, which represented a detainee inside of an interrogation room. The temperature of the interrogation room was maybe 10 or 20 degrees,with loud music playing. Sometimes that detainee would stay there for my entire 12-to-14-hour shift. He was shackled to the floor by his hands and his feet, with nothing to sit on, loud music playing, in the freezing cold. I guess that’s torture; that depends on who you ask.

I hear there is an official list of things that are and are not torture. Waterboarding is torture. My recent example is not. I can’t believe a human being could even write a list like that. The other issue I would like to address is the common usage of the Quick Reaction Force, which is a rotating, five-man team established each morning. If a detainee is unsatisfied with his stay and becomes rowdy, five grown men are fitted with riot gear and lined up outside of a cell while the platoon leader of that camp sprays the detainee in the face with pepper spray. I was sprayed with pepper spray once, and I feel that’s one of the worst moments in my life. It put me on my knees for two to three hours afterwards, and in a great deal of pain for the next three days. I would never, ever want anyone to have this happen to them.

After spraying the detainee, these five men would rush in and take whatever opportunities they could. The standard operating procedures do not state that you should beat the sh*t out of detainees, but I guess that some people just decided that’s what they were going to do anyway.

These are all on tape, by the way. The government makes sure that each one of these operations is taped. I taped several of them, and I would be happy to show you those clips, but I doubt they will be released anytime soon.

After the detainee is taken forcibly from his cell – that’s probably the first time that he’s left his cell in five, six, seven days – the detainees are beaten, pulled out to the back, shaved, all of their hair, their beard, and then taken to wherever they were supposed to go. There was one other thing I wanted to address, about the use of the term "detainee." We were told it had to be detainee. It had to be detainee. If it’s a prisoner, then they are a prisoner of war, and subject to entirely different laws. If they’re detainees, they’re subject to no law whatsoever, because there aren’t laws for detainees. Because they are called detainees, they don’t get trials and there is no code for how they’re treated. It’s semantics, and we need to pay attention to those; they’re important. It’s the difference between calling something a detention facility and a concentration camp, even if they’re the same thing.