Yesterday morning, while I was drinking coffee and reading and my wife was getting ready for work, we heard an emergency alert sound from our phones. I figured it would be a storm warning, but the weather was clear. My wife looked at her phone and said a missile was coming. She immediately sprang into action, grabbed a gallon of water from the fridge and brought it and our dogs into the bathroom, while I looked at the message on her phone and tried to process what it said. It was an emergency alert from the state: 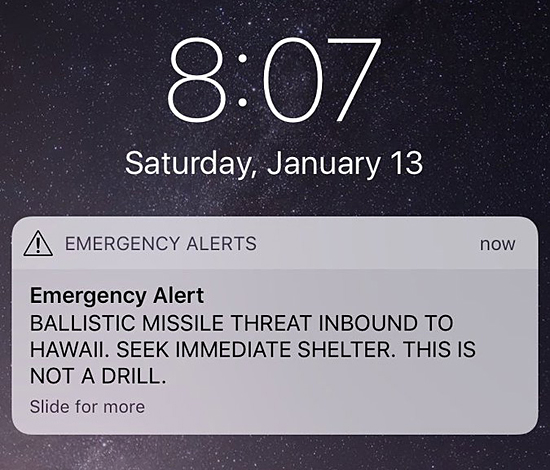 Right now, there’s a ballistic missile actually flying through the air at 15,000 miles per hour toward Hawaii – probably Honolulu, where we are located. This is happening.

As a graduate student in American Studies, I both follow politics closely and have studied what happens in a nuclear explosion. I knew that during the week, North and South Korea had been engaged in peace talks regarding the Olympics, and in response, the Trump regime had threatened illegal military strikes on North Korea and had flown nuclear-capable bomber planes over the area. So I figured either Trump, following in Nixon’s self-proclaimed “madman” tradition, had decided to carry out a surprise attack and NK had responded, or NK had simply been scared into a suicidal first strike. Either way, I thought, this would probably mean the start of a huge war.

A ballistic missile attack had always seemed like a fairly remote possibility, but something that could certainly happen any time – and was probably a lot more likely than we’d prefer to imagine. And now, we were told by the government in very certain terms, it had happened. The missile was on the way. It would hit at any moment.

So, we hunkered down in the bathroom and braced for an extremely painful death or near death. As we waited, we looked online for more news. All that came up in a search was people tweeting about the alert, expressing shock or saying things like “Missile headed to Hawaii. I’m going to die now.”

So we sent a group text to our families saying good bye. This might very well be it for us, as it has been in similar fashion for so many, before.

After about two minutes of waiting and imagining the heat wave, third degree burns, frying organs, storm of flying glass and metal, 600 mile per hour winds, and collapsing building that was about to happen, we decided to make a break for shelter and higher ground further away from Honolulu.

We took the dogs and hurried outside. Some people were out there crying, with desperate expressions that said this is the end, this is going to be very bad. We asked if they wanted to come with us, but they declined. We got in our car and drove uphill away from Honolulu, and went into a Safeway parking lot. Some people were running from the building with cases of water. We hurried inside Safeway with our dogs. People were sitting on the floor, heads in hands, waiting for the impact. It had been ten minutes. This was about to happen.

Once we felt like we were in the best place in the building, we frantically checked our phones again as we continued to envision the apocalypse that was going to occur any second. I then saw that Hawaiian representative Tulsi Gabbard had just announced on Twitter that she had been calling authorities, and had confirmed it was a false alarm.

At this point, we had spent twelve minutes thinking that a nuclear ballistic missile was actually speeding towards Hawaii, and that everything was about to become extremely terrible.

Going from thinking your world is about to change like that to hearing “oops, false alarm”, is quite a reversal.

We started telling people that we had heard from Gabbard that it was a false alarm. We went outside and told others. The news seemed to be spreading around that there was no missile. People were still wary, but calming down. We got in touch with our families.

As we tried to decompress and discuss what had happened, we agreed it wasn’t so much a matter of being angry at whoever had accidentally sent the alert (though obviously that was a bad mistake), but more the existence of circumstances in which getting nuked is actually a thing that can realistically happen any time.

We thought about the millions of people who have actually been wiped out or seriously maimed by these kinds of weapons, paid for by our tax dollars and deployed by racists and armchair warriors in lieu of negotiations, in wars of aggression, and extra-judicial execution-by-explosive of “suspects” by the regime that controls the territory where we live. We thought of the people living under this and far greater levels of stress and threat constantly, being killed and horribly maimed constantly by explosives we are being made to pay for or by proxy regimes supported by this government – the world’s biggest arms trafficker and in 2013 named in a global poll as by far the greatest threat to world peace. (US provides aid to about 75% of the world’s dictators, as defined by the US.) We saw that corporate propaganda outlets like CBS were already using the false alarm in Hawaii to continue their highly successful efforts to prepare the US public for aggression against the “rogue nation” of North Korea, which suffered a massive genocide at the hands of US bombers and has been surrounded and under siege ever since.

A friend outside Hawaii, who consumes virtually only Western corporate propaganda news media, actually said to me that if we had been nuked, yesterday, “at least North Korea wouldn’t be a problem, any more”, since the US would wipe it off the map. Millions of people, including us, would be dying horribly, but a people-group that has been a victim of American genocide and lives under constant, intense pressure and military threat from that same, genocidal state, would be completely wiped away for eternity. Lovely.

This disturbing experience thus highlighted, for us, the importance of resisting nationalistic, group insularity by seeking, in addition to mainstream Western sources, regular exposure to non-Western, international, global, and non-corporate, non-oligarchic information sources and opinions. Sources like Democracy Now, The Real News, Antiwar.com, Telesur, PressTV, RT, Al Jazeera, WSWS, Consortium News, and many others. All of these sources, including US-aggression-supporting and oligarchic outlets like the Bezos Post, NYT, NPR, and Fox, provide information, but also important contrast with, and insight into, each other.

In Ordinary Men: Reserve Police Battalion 101 and the Final Solution in Poland, Robert Browning notes that one of the reasons Nazis who refused to support their murderous government gave for their dissent (for which none were seriously punished) was that they had had experienced international exposure. They had broken their German insularity.

Those who had been exposed predominantly to information from German sources largely followed directives from the German regime and supported or carried out aggression and killing. The two most crucial values that had been cultivated in their minds were that Germany was superior, and that its actions, though they might at times be firm, were carried out for good reasons.

Breaking group insularity allowed some to discover that these assertions were absurd, wrong and, regardless, irrelevant.

Robert J. Barsocchini is a graduate student in American Studies. Years working as a cross-cultural intermediary for corporations in the film and Television industry sparked his interest in the often astounding discrepancy between Western self-image and reality. His work has been cited, published, or followed by numerous professors, economists, lawyers, military and intelligence veterans, and journalists.