The tale of the terrible neighbor is a cliché familiar to all Americans. Days drone on with monotonous drum beats as you exist seemingly by freeze-frame image pulling into your driveway with the neighbor’s hose spilling over your fence, with his crabgrass and brush invading your backyard, whose pet prefers your grass to his owners for relieving himself. This nightmare of suburban America is practically overlaid onto our psyche as one to avoid at all cost, like overcooked top sirloin or watching soccer for fun. If border disputes arise, escalate by visiting the clerk’s office. If their eldest son develops a budding interest in repairing used cars, contact the homeowner’s association. If the relationship becomes too tenuous, make a fruit cake knowing full well they’re gluten-free. These are ardent defenders of property rights for a milquetoast showing of sovereignty because after all, this is America.

So how about abroad?

Iran has become America’s latest subject of the two-minutes hate, and how vociferously Joe the Plumber participates. The transition from targeting Sunni insurgents to aligning with them against the Shiite Iranian has been seamless. It wasn’t until just recently any American even considered a Persian for the “fight-them-over-there” principle US foreign policy has adopted, so what an incredible relief it must be to see Trump talk tough on nukes and oil for spoon-fed onlookers.

If hawkish Iranian-war supporters could take even one commercial break to consider the position of this new and supposedly existentially-threatening opponents, I think they’d see just how preposterous these policies have become.

Iran’s borders are predominantly shared by Iraq and Turkey to their west and Afghanistan and Pakistan to their east. Without delving too far into the historical implications of those neighbors, suffice it to say US policy has thoroughly politically destabilized a country on both sides (and then some). In the case of both Iraq and Afghanistan ostensibly, the US enemy was the enemy of the Iranians, Sunni radicals. Just across the Persian Gulf are two major regional allies of the US, Saudi Arabia, and the UAE. Iran is nearly surrounded by unfriendly nations linked in varying ways to the US and its military.

With a new election cycle only one year after agreeing to significant terms on nuclear non-proliferation, a new Iranian diplomatic stance has emerged; red-faced blustering and flying flecks of spit to show just how brash Uncle Sam can be. The Trump administration has pulled out of the Iran nuclear agreement and imposed heavy economic sanctions on the country and its global traders. The people of Iran are already feeling the effects with the Rial losing significant value and costs for medical treatment and food rocketing upwards.

Meanwhile, the US leads the entire planet in weapons exports, with Iranian neighbors on the receiving end of billions of dollars in arms sales. Saudi Arabia, UAE, Pakistan, and Iraq are four among the top ten, with the Saud House at number two per 2017 data. 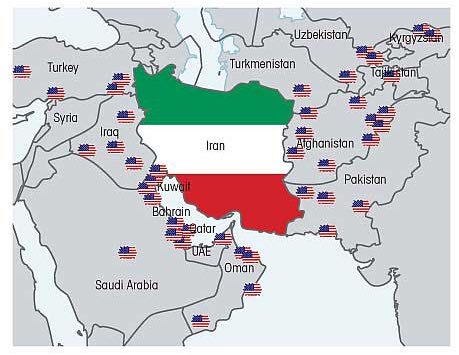 Aside from increasing military and economic pressures beyond the point of pragmatism, Iran is one rash decision from being beset upon on all sides by US military might. The United States has dozens of military bases surrounding the country’s borders, with missile systems and missile defense set strategically to mitigate potential attacks. An increasingly inflammatory US posture is one that Iran has to take seriously.

In an interview with NBC, Iranian Foreign Minister Javad Zarif explicitly mentions his untenable domestic position as a considerable remora for furthering peace talks. Encroaching military and strategic efforts, crippling sanctions on oil sales and regional dissemination of billions in weapons has made Iran increasingly into the victim of strong-armed circumstance, rather than the regional power brokers they should be treated as.

In diplomacy, the proof is in the pudding. Rhetoric like "greatest exporter of terrorism" goes much further when the fly-stuck corpse of Yemen isn’t visible across the Gulf, or Iraq’s just a door down, with Old Glory waving above them both. Iran’s left to consider that they’re now untethered from a nuclear nonproliferation deal that took months to finalize requiring they don’t make nukes they never intended to make, peace remains fragile with potential military siege and examples of the same all around them, and a populace blockaded. No counterpoint tips the scale.

We, as Americans, can recognize a bad-faith actor as well as any lousy neighbor. There’s no denying the Trump administration has thoroughly botched Iranian diplomacy in the hopes of escalating tensions internationally with the threat of war and domestically, through sanctions, with the risk of revolt. If the ultimate ends of Iranian talks were a real peace and not a justification for war, every aspect of our policy would be something more like its opposite.

The ends are never peace in hegemonic politics, with Iran or any other perceived belligerent. Much like the bad suburban neighbor, capitulation to my will at the expense or in complete disregard to your own is the only suitable outcome. Unfortunately for the people of Iran and any liberty-minded, peace-loving American, that lesson will likely be strewn in blood across another medium in Persia.