Europe’s impending depression is not to be discounted in terms of its relevance to this side of the Atlantic pond. Since the turn of the century, US exports to the European Union have soared from $12.3 billion per month to $30.4 billion. That latter amounts to $365 billion on an annual basis.

Needless to say, when European GDP descends into a double-digit slide, demand for US exports will plunge, causing declines in production and employment on this side of the Atlantic. 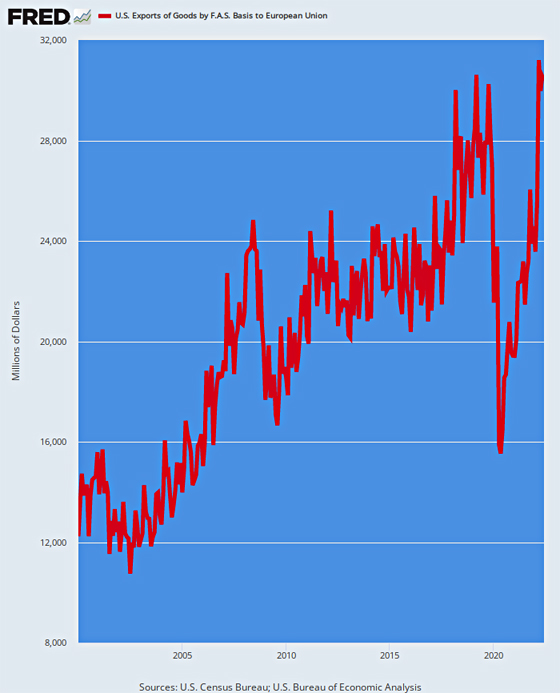 What looms on the far side of the pond, of course, is the possibility of an inflation-driven depression in Europe. Already the headline CPI has practically gone into orbit, posting at 8.9% Y/Y in July.

And today the August flash CPI came in even higher: To wit,  headline HICP inflation rose  another 21bp to 9.08% Y/Y.

As shown below, recent inflation readings dwarf anything Europe has experienced in recent times, meaning that consumer purchasing power is being drastically reduced. 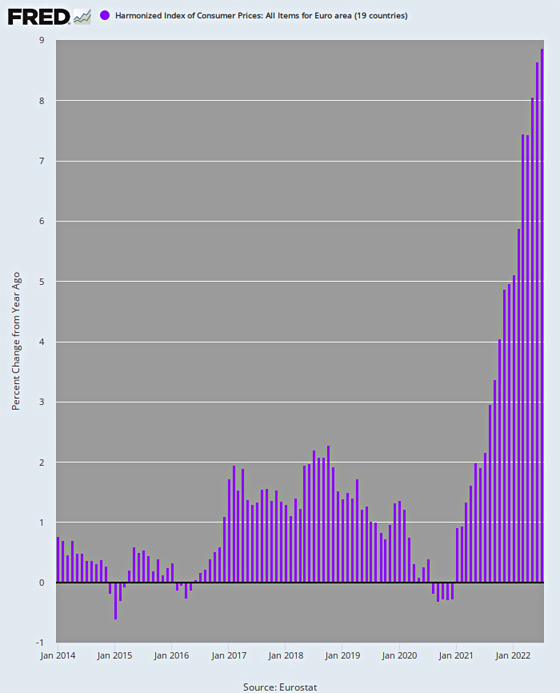 But faltering consumer purchasing power is barely the half of it. The fact is, Europe’s industrial sector is natural gas driven, exposing it to a devastating cost-price crunch owing to the region’s suicidal sanctions on Russia and the resulting collapse of Russian pipeline gas supplies.

Not surprisingly, the EU will now convene an emergency meeting of energy ministers as gas prices spiral higher, hitting an all-time European high last Friday and threatening to send the region’s economy into the drink.

This desperate call came as European gas prices hit a record high above €343 per megawatt hour ($100 per MCF) or 30X the normal US price on Friday. That culminated a week in which Europe’s benchmark gas price had soared by almost one-third as traders and utilities rush to secure supplies ahead of the winter.

The resulting stark threat to energy-intensive industries is self-evident: The cost of Nat Gas has risen 14X since mid-2021.

As a consequence, Nat Gas-intensive industries are simply shutting down due to the prohibitive cost of process fuel. For example, the region’s fertilizer industry association on Friday warned that 70% of production in Europe has already been curtailed by high gas prices, illustrating how the energy crisis is rippling across industries and threatening sectors from glass-making to food production and metals smelting. 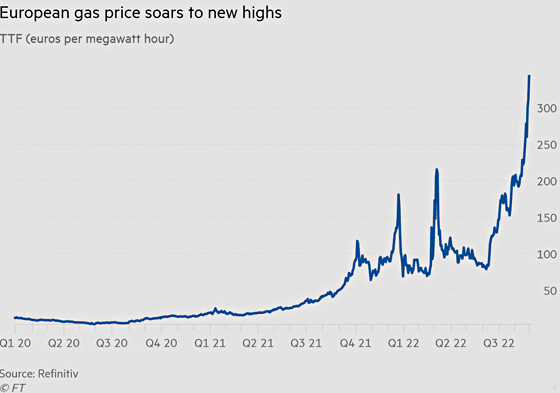 Likewise, the cost of electricity has surged to record highs in Europe during the past week, paving the way for painfully high consumer rates across the continent through the winter and well beyond.

Overall, the entire Eurozone, as well as the United Kingdom, faces the worst cost-of-living crisis in modern memory. 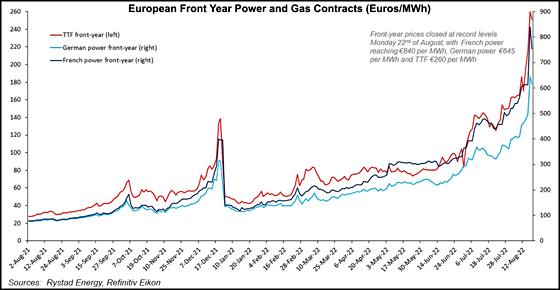 Not surprisingly, therefore, over the past week, shocked Europeans – mostly in the UK and Ireland – have been posting viral photos of shockingly high energy bills amid the ongoing (and worsening) energy crisis. As Zero Hedge noted,

Several of the posts were from small business owners who getting absolutely crushed right now, and won’t be able to remain operational much longer.

One such owner is Geraldine Dolan, who owns the Poppyfields cafe in Athlone, Ireland – and was charged nearly €10,000 (US$10,021) for just over two months of energy usage.

"How in the name of God is this possible," tweeted Dolan.

I got this electricity bill today, how in the name of God is this possible, we're a small coffee shop in westmeath pic.twitter.com/uz5J8BePhB

The energy savings plans now being contemplated, in fact, tell you all you need to know. They imply that by mid-winter, the European economy will be flat on its back.

Ulf Kempfer, vice-president of the German Association of Municipalities and mayor of Kiel gave an interview to Welt that sheds light on the  desperate measures now being readied to reduce electricity usage. Assuming that Nord Stream 1 continues to operate at one-fifth capacity, German energy consumption will have to be reduced by at least 20%; if the Russians cut off all gas, which they may well do, Germany will face a 40% shortfall.

Even the best case is a catastrophe that turning off street lights will not remedy. The biggest savings are to be had in drastically reducing indoor heating, and deep cutbacks on the use of warm water, refrigerators, washing machines and computers. Municipal services and office buildings will probably have to be closed, though some facilities, like public libraries, may be kept open as a refuge for those unable to heat their homes.

Moreover, in the midst of soaring hitting and electric bills, consumers may face a double whammy of high electric bills plus blackouts too. That’s because millions of households in Germany and elsewhere on the continent have scrambled to purchase electric heaters and heat pumps in order to reduce their exposure to out-of-this-world nat gas bills.

As a consequence, there is now a one-year backlog for heat pumps, implying huge incremental demand on the electric power grid. And the grid was already groaning under existing demand, meaning that heat pump and electric heater-driven surges during the ultra cold days this winter could cause the grid to shutdown.

As prices for oil and gas have risen enormously, in fact, European consumers have been desperately seeking alternatives. In Poland, for instance, there are miles long-lines at the coal mines composed of household vehicles lined up for a ration of coal.

Likewise, in Germany and elsewhere those who can afford it have installed heat pumps, while those who can’t have been going to the hardware store and buying electric heaters hand-over-fist. But as one energy expert noted,

And all of that requires electricity, but the grid isn’t designed for it … "We’re not going to be able to do that. The power grid is going to collapse. The blackout will come for sure."

We’re looking at nothing less than the total failure of green energy policies. The Greens have spent years promoting electricity as the only environmentally responsible sustainable solution, shutting down our nuclear power plants, pouring untold billions into wind and solar which do not work, and burning cheap Russian gas as a fake "transitional" measure to hold the whole scam together. It’s no accident that former chancellor Angela Merkel, responsible for our disastrous decision to phase out nuclear power, fought so hard for Nord Stream 2. But now the Russian gas is gone, there’s not enough power and random plumbers in Starnberg are praying that new heat pumps are delayed long enough to spare their fragile electrical grid new shocks ahead of winter.

So the question recurs, as Europe prepares for its winter from hell, what was the point?

The fact is, the Sanctions War has been an abysmal failure in terms of punishing the Russian economy and Putin’s ability to preserver in Ukraine.

As it happens, Russia is pumping almost as much oil into the global market as it did before its invasion of Ukraine. The WSJ’s Joe Wallace and Anna Hirtenstein report Russia is also making more money than ever before from the sale of oil and refined products owing to the sharp upturn in prices.

Russia’s crude and product exports are down just 600,000 barrels a day since the start of the year from a pre-war level of 7.85 million barrels per day, but Russia has earned $20 billion in average monthly sales this year compared with a $14.6 billion monthly average in 2021. 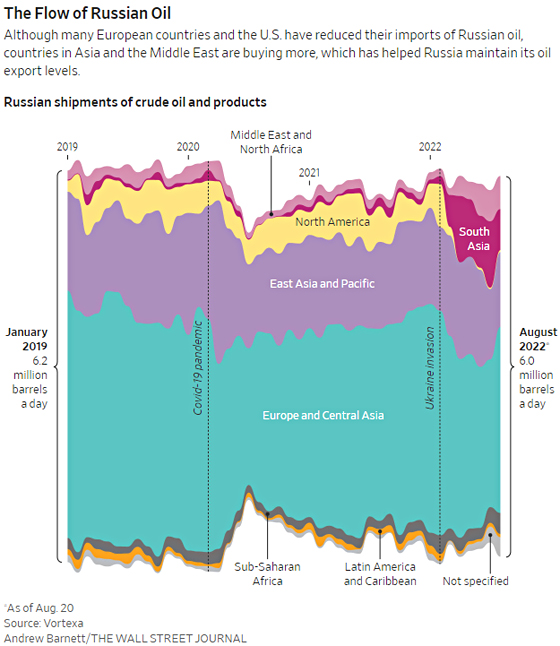 As to the point of this insanity, we sincerely hope that European voters wake up this winter and cause every one of the lap dog governments in Europe to fall. There is no other way to stop Washington’s arrogant warmongers and neocons, who have now taken the global economy to the brink.